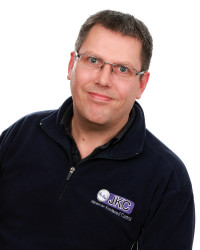 This winter's mild, but very wet conditions may well have promoted an early growing season for Japanese Knotweed but, in reality, this invasive, non-native plant species proves continually resilient, whatever the climatic conditions. David Layland, a founding member of INNSA and joint managing director of Japanese Knotweed Control, outlines the current scale of the UK problem and the measures being taken to counter it

Japanese Knotweed is estimated to annually cost the British economy some £166m. Approximately 9.2% of all rivers and canals in England and Wales, and 3.1% in Scotland, are infested with Knotweed and the total annual cost of its control in riparian habitats (excluding lakes) is some £5.6m, slightly more than the £5m it takes to control the problem on the UK's road network.

Originally native to eastern Asia and China, before being introduced into Europe in the 19th century as an ornamental plant, Japanese Knotweed's rapid and, at times, devastating spread is indicative of its ability to adapt to a wide range of climatic conditions. No matter how wet our summers get, or how cold our winters, the UK's wildly unpredictable weather is never likely to seriously diminish the knotweed threat.

In recent years, our work has taken us to all corners of the British Isles and the damage caused by widespread knotweed never fails to surprise. In the remote Hebridean Western Isles, for example, where we have carried out a number of treatment programmes, Japanese Knotweed is widespread and increasingly impacting on a number of development projects. 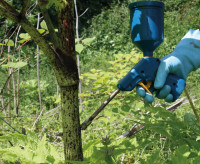 Many plants don't cope well with the harsh Scottish climate, less still the bracing conditions of the Outer Hebrides but, whilst the shallow peat soils, high winds and salt air have meant that, like many plants on the islands, Knotweed's growth has been stunted, its spread has been no less prolific, even ousting many native plant species in its wake.

Japanese Knotweed, as well as other invasive species such as Himalayan Balsam and Giant Hogweed, are all growing in increasing numbers along our river corridors, often with serious impact on the biodiversity of the riparian and aquatic environment. As rain falls and water levels rise, there is increased risk of rhizome spread along the length of the river and many river authorities are now recognising and addressing this problem.

With UK weather conditions unlikely, however, to have any impact on reducing knotweed spread, the return of the growth season, albeit slightly earlier this year, once again sees it largely left to professional treatment specialists to try and tackle the problem. The treatment techniques employed throughout the winter, for example excavation and dig and dump, tend to now make way for the preferred method of stem injection treatment. 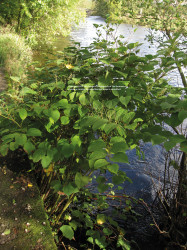 Stem injection equipment, which injects a given dose of glyphosate herbicide directly into the plant stem, is increasingly recognised as achieving maximum control and specific to the plant species, with no impact on the surrounding vegetation and wildlife.

Knotweed absorbs the herbicide into the rhizome with a much faster absorbency rate than that of foliar spraying and, crucially, much greater accuracy. Results can be seen within two weeks as the weed goes dormant and shows visible signs of foliar decay. This also enables any canes missed during the initial treatment process to be readily identified and treated with a re-application.

Most significantly, stem injection is not dependent on weather conditions, such as wind or rain, and can be safely used in most site conditions without any risk of spray-drift or run-off.

It is important to ensure that you only use Amenity Assured contractors so that you can be confident that they have properly trained operatives who will follow Best Practice. Membership of a trade body, such as INNSA, gives reassurance that the company complies with the latest protocols, such as the Knotweed Code of Practice. 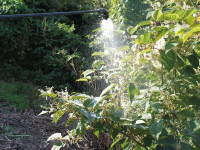 Contractors must be PA1/6 qualified, and must have specific modules for specialist applications like stem injection, Ecoplug application and aquatic use.

Whether engaging a contractor or employing the service of an in-house qualified operator, a trusted glyphosate brand with current CRD approval should be used.

Avoid cheap glyphosate of uncertain specification or origin, which may be illegal or counterfeit. Look for the 'Clean label' under CLP and, if using in aquatic areas, choose one which does not display the 'dead tree dead fish' pictogram (GHS09).

Monsanto offers detailed best practice advice on spraying for optimum control via its helpline or website.

- Ensure weeds are green and growing to ensure uptake and translocation. Poorest translocation will occur during the stem extension phase of growth as the natural flow of sugars from photosynthesis in the leaf is upwards to the fast-extending stem for use in the developing flower

- Treatment at this time - often in early spring - can lead to a dieback of the stem, but subsequent re-growth from the base. This is well known in Japanese Knotweed, but also occurs in biennials like Canadian Fleabane and grasses such as Bamboo

- Once the flowers are formed, the next physiological stage for perennials is to move sugars back down to the roots for storage Spraying at this time will give excellent translocation down to the roots and a much higher level of kill

- Climate is also significant. Moderate temperatures favour efficacy, 15-25OC. Low temperatures/light frost give a slow, but good kill, but hard/long-term frosts will lead to poor uptake and poor performance. High temperatures can cause stress in the target plants, shutting down the stomata, leading to poor uptake

- Rain before spraying wet leaves is not a problem, but rain after spraying, before uptake can lead to very poor results. Roundup ProActive is rainfast in 1- 4 hours, whereas most glyphosate formulations require a minimum of six hours, preferably 24 hours, of dry weather. Choosing a product which gives greater flexibility for a wide weather window

- Plan to spray when wind speed is Force 1-3, (1.2-6mph) in a direction away from susceptible vegetation. Glyphosate is non-volatile and will not lift from target areas in high temperatures like some hormones, but avoid temperature inversions where cool air is trapped under warm air. Droplets can behave in unpredictable ways and move away from the target area.

Roundup ProActive is available from the Pitchcare shop