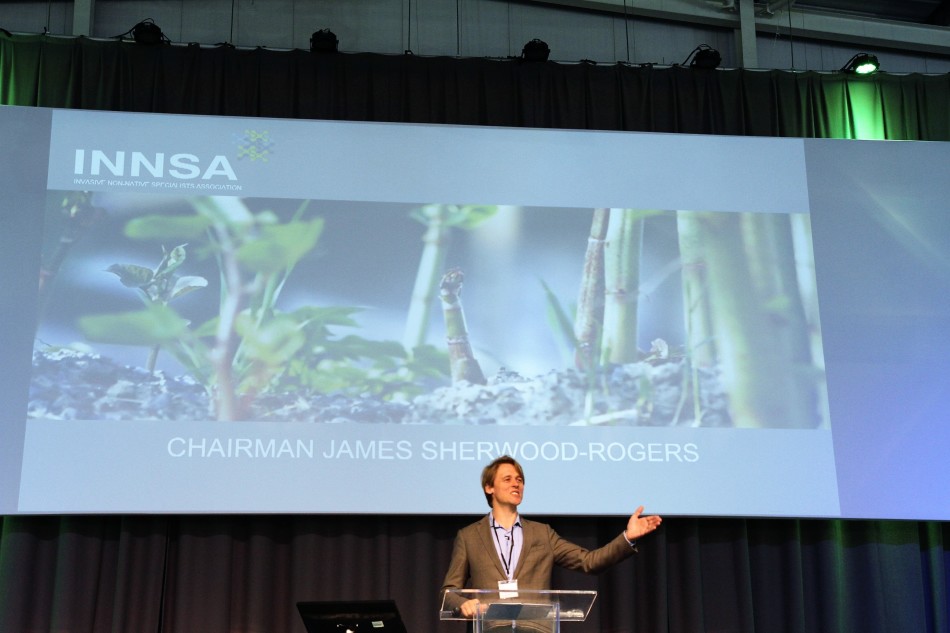 The third annual INNSA Conference has taken place with a full agenda on the biodiversity, property and legal issues surrounding invasive species.

Held by the Invasive Non-Native Specialists Association (INNSA), the event is normally aimed at attendees from within the non-native species remediation industry.

This year, there was a particular focus on Japanese knotweed, which is believed to be the biggest unmanaged risk in the UK property market. This year's conference also included all those affected by the invasive plant, such as local authorities, property owners and developers, surveyors, conveyancing lawyers and mortgage lenders.

It was the first of these conferences with new INNSA chairperson James Sherwood-Rogers at the helm. Sherwood-Rogers, who has a wealth of experience in property and environmental roles, opened the conference by explaining his role in the association outlining his plans to further INNSA's important work in the invasives industry and acquire new members.

He said afterwards: "It was fantastic to welcome such a wide range of exhibitors, delegates, and expert speakers to the 2017 INNSA Conference. There are a lot of myths surrounding invasive species, especially Japanese knotweed, so it is key that we provide opportunities for property professionals to receive up-to-date, relevant information from the experts."

The property focus was particularly topical following the recent court case involving a homeowner and Network Rail. The legal implications of the recent four-year legal battle were discussed by Roger Burnett, the lawyer who won the landmark ruling. Burnett gave the latest updates on the case, explaining issues such as the property value halving due to the infestation, dehydration damage caused to the soil, and the interference with "quiet enjoyment" of the property causing a legal nuisance.

The wide range of speakers also included Sean Hathaway, Environment Officer for the City and County of Swansea, and the UK's first dedicated Japanese knotweed council officer. He outlined how Swansea undertook an Urban Knotweed Survey and first large scale treatment programme in the early nineties.

It was the first local authority to adopt a knotweed plan, showing how to deal with the invasive plant even with limited resources,

Much of the conference was focused on raising standards across the remediation industry, through comprehensive insurance for works, accreditation, and the Invasives Code. Kate Faulkner, PCCB Board member and consumer advocate, gave a presentation on the importance of using accredited and audited contractors, alongside how the Invasives Code protects property owners, buyers and sellers. The standards, insurance and guarantees that are in place for INNSA member companies are important to give clients peace of mind.

David Layland, founding member of INNSA and co-founder of Japanese Knotweed Control, one of the UK's first remediation specialists, addressed delegates with a presentation on improving standards in an unregulated industry. He explained that the handful of remediation companies that existed in 2006 has now turned into closer to 400, making it increasingly important for companies to have accreditation, insurance and warranties, and a long-term remediation strategy. He added: "Any property professional affected by the plant can have peace of mind knowing legal guarantees are in place and they are working with a reputable remediation firm to control the problem."

Barrie Hunt, technical development manager at Monsanto, gave an update on the ongoing EU re-approval process of Glyphosate, used to treat Japanese Knotweed. He called for the remediation and property industries to get involved in lobbying for the Department for Environment, Food & Rural Affairs to highlight the importance of Glyphosate in controlling invasive weeds.

The ongoing use of Glyphosate is still in the balance with a vote at the European Parliament expected in July 2017.

The soft launch of a new INNSA Code of Practice was also announced, which will replace the recently withdrawn Environment Agency Code of Practice. The new Code will be the definitive best practice guide for dealing with knotweed infestations, updated inline with the most recent legislation.