0 Invertibrates - there is life in dead wood! 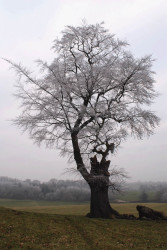 Often overlooked in favour of the more cute and cuddly members of British wildlife, invertebrates are a key element in the functioning of the living planet and, some may say, equally as charismatic. Whilst it's not hard to miss the morning song birds, or brightly coloured flowering plants in the summer, search beneath the surface and all sorts of curious creatures can be found.

Woodlands and parklands can be some of the most important invertebrate habitats in the UK, supporting a number of nationally rare species, the majority of which are associated with dead wood. Although many people may see damaged or dying trees as unsightly, deadwood is vital for the survival for some of our most interesting, brightly coloured, and threatened species in the UK. 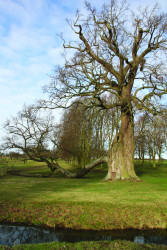 Saproxylic invertebrates, which rely on deadwood for survival, make up 6% of British invertebrate fauna, and include 700 species of beetle as well as flies, parasitic wasps, moths, bugs, sawflies and spiders. These creatures rely on deadwood in a number of ways; it can provide a home for adults and juveniles, contain the ideal conditions for egg laying and larval development, and offer a food supply in the form of wood, fungi, mould, sap and other saproxylic invertebrates. Importantly, these invertebrates have been described as bioindicators and can be used to assess the overall health of the ecosystem.

Such invertebrate species are essential for the maintenance of overall ecosystem health. Not only do they provide food for birds, mammals and other invertebrates further up the food chain, but they are vital for the natural regeneration of our woodlands. These species, historically, have survived in natural 'virgin' forests, spanning thousands of years, with a continuous supply of ancient trees, falling branches and dead wood.

However, saproxylic species have now been identified as the most threatened group of invertebrates in Europe due to the decline in suitable habitat.

In the present day, woodlands have been heavily managed by humans, resulting in even-aged forests maintained for timber, with many woodlands kept 'tidy' by the removal of dying trees or fallen branches. According to the European Red List for Saproxylic Beetles (2010), nearly 11% of saproxylic beetles are threatened, and 14% are thought to have significantly declining populations.

The role of saproxylic invertebrates in wood decay 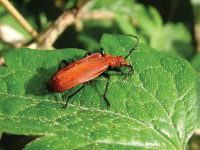 The hard sapwood is invaded in the early stages of decay, and this can only be achieved by those beetles with heavy jaws and good digestive systems. Some longhorn beetle larvae are capable of this, and even larger burrows can be formed by the death watch beetle. These burrows open up the way for other species, such as the larvae of the large robber fly which predate on other larvae and eggs.

As the decay progresses, fungi make the wood softer, allowing a greater diversity of species to coexist. Flies, hoverflies, centipedes, millipedes and mites may utilise the wood at this stage, and it may be used as a hibernation site for social 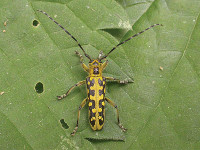 wasps, ground beetles and queen bees. In addition, stag beetles, longhorn beetles and click beetles may also be present, the latter of which can produce a violent 'click' to bounce them into the air to avoid predation.

Other species may rely on different forms of decay, such as rot holes and sap runs. For example, red rot in trunks and branches of oak trees form an important habitat for the rare heartwood click beetle. Also, the larvae of the hoverfly, Myathropa florae, have long tails, which allow breathing in aquatic conditions such as rot holes which are filled with water.

Woodlands have many roles to play in a functioning ecosystem, and both living and dead trees are involved in carbon storage, soil nutrient cycling, hydrological processes and the provision of food and shelter for a wide range of flora and fauna. Diverse and properly managed woodlands will ultimately supply the habitat niches required by deadwood invertebrates, as well as maintaining overall ecosystem health. 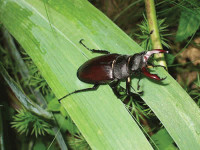 Deadwood can exist in various forms, from entire standing trees with various degrees of rot, to small twigs in the leaf litter. Many saproxylic invertebrates need very specific conditions, therefore size of deadwood, age, species, stage of decay, and whether it is standing or fallen are important factors to consider. When managing a site, variety in the structure of the woodland is vital.

In order to protect these communities of interesting and important invertebrates, woodland needs to be managed primarily in a way that conserves the living trees, as these will become deadwood in due course without the need for human intervention.

In woodlands with a high level of management, consider retaining some of the older, larger or damaged trees and allowing them to die naturally rather than removing them. Saplings can be planted so that, in the future, there will be trees reaching maturity on a continuous basis. Choose a mixture of native tree species.

Leave deadwood where it is - both fallen and standing, including both twigs and entire trunks. Mature trees with heart rot can still stand safely for hundreds of years without the need for removal. They support a number of rare invertebrates that rely on the unique conditions it provides. 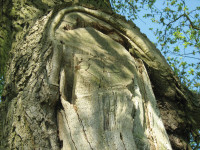 If a branch is rotten, and requires removal in the interest of public safety, leave it on the ground below the tree. It is better to remove unsafe limbs than fell the entire tree.

Veteran trees with full crowns can be managed in the same way. If fallen branches or other large material needs to be moved, drag it beneath the tree, or to the woodland edge where it can be under partial shade.

Natural wet areas should not be drained, and fallen timber should be left in the water.

Structural diversity in woodlands is important for biodiversity, which includes open, unwooded areas. Reduced mowing along woodland edges, to encourage flowering plants and shrubs, can provide an essential nectar supply for adult flies and beetles whose larvae develop in deadwood.

Shrubby species, such as hawthorn, can provide a food source for an assortment of flies and beetles, both from the flower and the decaying timber. 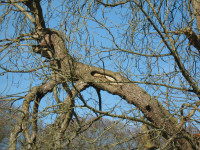 Carefully controlled grazing of cows or horses within woodland can be important for species such as dung beetles (five of which are nationally scarce in the UK) and also help to control rank vegetation and scrub.

Trees with damage, splits, sap runs and bracket fungi are likely to be important for a range of species such as hoverflies (Ferdinandea ruficornis) and (Brachyopa bicolour) which rely on sap flows for their larvae. Artificial damage, such as ring barking, leaving jagged stumps, creating splits in the trunk or making holes at points in the forks and crowns of trees can encourage early colonisers.

Existing rot holes should never be filled or chemically treated. Soft, red rotten heartwood is the sole habitat of some of our rarest and most threatened invertebrates, such as the larvae of the violet click beetle.

When managed well, woodlands can not only support saproxylic invertebrates, but also a wide variety of plants, fungi, birds and mammals. Professional advice can be sought from the Wildlife Trusts and ecological consultancies to help with management to restore and maintain woodlands for deadwood invertebrates.

Natural obstacles, such as woodlands and trees, not only add interesting challenges to the golfer's game but can also be valuable for a range of wildlife, as described above. Based on the large areas of a golf course that are 'non-play' areas, (sometimes as much as 50% or above) there is a lot of scope for wildlife management.

The older parkland golf courses, as well as courses with newer growth woodland, could easily adapt management practices to benefit deadwood invertebrates and increase the biodiversity of a site. Parkland golf courses have been shown to harbour larger numbers and a greater diversity of invertebrate fauna than surrounding farmland, suggesting they can be important for local biodiversity if managed sensitively.

Incorporating natural buffer zones around trees, woodlands and hedgerows within golf courses and surrounding areas could provide wildlife corridors and help ensure the continuity of deadwood invertebrates, as well as numerous other flora and fauna.

Creating log piles
Land managers can easily improve the diversity and health of a woodland by artificially increasing the amount of deadwood. More mobile saproxylic species and fresh deadwood colonists will soon move in.

• Leave logs and branches where they have fallen, or create log piles from excess material
• Position piles with its long axis running east to west
• Site the pile at the edge of a ride or clearing - ideally on the north or north-east side of the clearing (e.g. in partial shade)
• As a general guide, a pile 1m high and 2-3m long will be sufficient
• Several piles scattered throughout the site is ideal
• Create new piles adjoining or close to old decaying piles to help less mobile species survive
• Heaps of fine twigs have limited value but brushwood could be tied into bundles and stacked to create more niche habitats for invertebrates

More information on habitat management can be found in Habitat Management for Invertebrates: a practical handbook by Peter Kirby; Habitat Conservation for Insects - A Neglected Green Issue from the Amateur Entomologists' Society; and Life in the Deadwood: A guide to managing deadwood in Forestry Commission forests, which is available online.