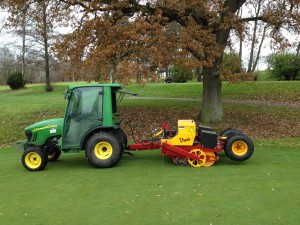 Overseeding the greens with a Vredo Supa Compact overseeder from Campey Turf Care Systems has proved to be a very wise move at Lancashire based, Clitheroe Golf Club.

Course manager Andrew Geddes took the decision to purchase the Vredo overseeder last August, following a trial the year before. "I first had to convince our greens committee to invest," said Andrew "So Campeys Ian Campbell arranged a demo last summer and we over-seeded the greens with Bent grasses to show how effective it would be."

The Vredo Supa Compact overseeder with its patented double disc action ensures accurate placement into the soil. This guarantees virtually 100% germination. Within 3-4 days Andrew could see the new growth and this continued to be evident throughout the autumn and winter months.

Andrew explained "I could show tangible, visible results to the committee very quickly. It proved that the overseeder was effective and there was no wastage. They agreed with me that it was clearly an investment worth making."

Apart from the greens, which will be over-seeded on a rolling programme every August, Andrew is intending to utilise the Vredo on other parts of the course to enhance the sward around the course generally.

The aprons, tees and pathways which carry high traffic will gradually be improved by introducing more seed over a period of time.

"The Vredo is part of a general improvement programme," said Andrew "We have also increased top dressing from 100 to 150 tons per year to enhance the amount of organic matter in the soil structure."

So far the course committee are delighted with the progress that is being made and consider the Vredo a positive asset to the club.