0 IOW Festival - Earley and on time!

At the mention of the Isle of Wight you'd be forgiven if Cowes Week came first to mind, the largest sailing regatta of its type in the world. However, the island is also home to another monumental annual event.

The Isle of Wight Festival is a three day music gathering that has played host to some of the biggest names in music including Jimi Hendrix, Free and Bob Dylan. After an absence of thirty-two years, the festival returned to the island in 2002, and has grown in popularity year on year. June 2010 will see 65,000 revellers descend upon Seaclose Park and call the Isle of Wight their home for three days.

Pan Publicity's' Greg Doggett combined his love of music, and a tip off from client Charterhouse Turf Machinery, to find out whose job it was to plan and prepare the island's grounds for such a massive event - and then return it to normal again after the festival goers have staggered off the island!

Seaclose Park is a multi sports venue owned by the Isle of Wight Council and the job falls to Andrew Earley, Contracts Inspector for the Parks and Countryside Division. The task of getting the island 'festival ready' is enormous, and the buck does ultimately stop with him.

It helps that Andrew was born and bred on the island, and that he has worked at the Council since he left Carisbrooke High School (near Newport) in 1985. "I always liked being outdoors and knew that a desk job wasn't for me," he explained. "When I left school at sixteen, I applied for a place on a government funded Grounds Maintenance Youth Training Scheme. This supplied me with a good, broad overview of the skills that I would need later on to look after all of the different grounds on the island. Once the course was completed, I took a job at the council as a School's Groundsman, looking after a catchment area of sixty schools".

In 1990, the Grounds Maintenance Department was privatised to become 'Group 90' and then 'N-viro Grounds Maintenance' where Andrew became the Contracts Manager. But, by 2002, and coincidentally the same year the Festival was re-established, he took up the position of Contracts Inspector back with the Council.

"I contract monitor a core workforce of fifteen to oversee the maintenance and upkeep of 100 sites all over the northern part of the island, including football pitches, bowling greens, parks, gardens, ornamental areas and a pitch and putt, in addition to the festival that is held on Seaclose Park each year. You can appreciate I'm kept very busy!" says Andrew. 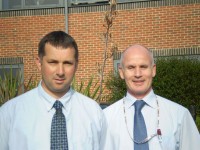 Preparations for the June festival begins at the start of April each year when Andrew has a 'pre festival' meeting with his Parks Officer, Andrew Mcintyre, to put an action plan in place. Andrew believes good preparation is essential for good recovery, so they discuss the aeration, seeding and mowing requirements and draw up a work schedule for the eight football pitches, and one cricket pitch, that all need to be restored after the festival is over.

Over the three days of the festival the pitches get majorly compacted and, up until last year, they only had a small Verti-Drain to do the work. "I decided we needed to invest in something that could handle the large area in a smaller amount of time," said Andrew, "so we did some internet research and found that nothing else on the market had the same spec as the Charterhouse Verti-Drain 7626, the biggest Verti-Drain they manufacture." A trip to Saltex followed, and a chat with Nick Darking secured a demo at the Arsenal training ground to see their 7626, with the ultimate sale being managed by New Forest Machinery.

They start preparing the ground in the middle of April, with intense aeration, as they believe it's important to plan in advance to tackle the problems that the festival will cause. Andrew's contractor aerates with 25mm tines set to a depth of about 14/15 inches, which the 7626 makes short work of because of its size. After that, they follow on with an overseeding programme, using a Charterhouse 1.5m Overseeder. Andrew fully expects people to say 'why the hell is he doing that when 65,000 people are about to jump up and down on it?' The reason I do this is to aid recovery after the festival has finished," he reasons, "April and May are ideal months to seed because we have a bit of moisture in the ground. Even if all of the seeds don't germinate, we still get a head start in the recovery process after the festival has moved on. I like to use a 100% perennial ryegrass mix that is made up of various different cultivars, it's hard wearing and recovers quickly making it ideal."

At the end of May, just before the site is handed over to the event organisers, Solo, they do their final mow with a Kesmac five gang mower. They leave a little bit of time before the production team arrive at the site for two reasons, firstly, it gives the grass time to grow and thicken up again and, secondly, it is a hard task to mow once equipment and staging arrives on the site.

The site is handed over to Solo's control from 1st June for three weeks, after a pre festival meeting and walk round with Andrew and his Parks Officer. They assess the general state of Seaclose Park during this initial inspection, and list down what damage is already there, so that Solo are aware of how the site is to be left when the festival is finished.

Seaclose Park isn't the only place that sees a transformation during the festival. "It's unbelievable," Andrew reminisces, "Newport (the capital of the island), sees a massive influx of people in and out of the bars. It's brilliant, you have a sea of festival goers walking through the town centre in colourful costumes of all shapes and sizes, and generally enjoying the weather!" But, the £10 million that the festival brings to the island each year doesn't please everybody, he goes on to say. "If you ask the younger generation, then they will tell you how much they love it. On the other hand, if you ask the older people in the community, especially those who live in the area that backs on to the park, they will give you a totally different answer! I suppose to summarise, it really is a case of mixed feelings."

Paul McCartney finished off the festival late on Sunday 13th June and, the morning after, the park revealed its true state. "The morning after the night before," laughs Andrew, "I am not kidding you, there is litter piled a foot high across the entire park. Luckily, Solo still have tenancy for another week so they clear all of the litter - they do a fantastic job, I can't fault them."

"But, even after eight years of being involved with the festival, it is still quite a shock to see the park 'naked'. I have to say, it looks like a desert!"

Before they can start on grounds reparations, they have to carry out the post festival inspection. Once the last of the articulated stage trucks has left the site, a walk-round with Solo is taken to assess any damage, such as broken curbs, oil spills and damaged footways. Once that work is taken care of, the real damage limitation starts.

"We put into action a programme of aeration to recover the ground. I prefer to use my smaller 18mm tines on the Verti-Drain 7626, because the ground is so compacted. If I tried to go in with the 25mm tines I use before the festival, I would cause too much damage. Directly after aerating, I overseed the whole park." "At the end of July, after the seed has had a chance to germinate and establish properly, we do our first mow. I always use a Spearhead flail mower for the first post-festival cut; the reason being is that there may still be debris like bolts, screws and glass lurking in the grass. Bolts and screws would destroy the contractor's gang of cylinder mowers - flail mowers are a lot more rugged and can withstand debris. Once August arrives, we return to our normal maintenance schedule and prepare for the new football season that begins in September."

Andrew's plan of action is obviously well rehearsed, as he has been in charge of festival preparations since it restarted in 2002 and, luckily, they haven't had one wet festival since that time. Not so for the 'Bestival' - another festival held on the island in September each year - which had an extremely wet event a couple of years back and ended up being a total mud bath.

"I have a young family here, and I can honestly say that I am happy," he says. "It's a different way of life on the island that I just don't think I'd get on the mainland. I visit the Saltex show in Windsor each year to keep up to date with the latest techniques. Logistically, I don't think it makes that much of a difference to cost - it's not like I live on the Shetland Islands!"

Andrew is someone who is clearly in love with the island he calls home.