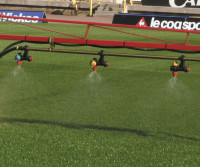 Integrated Pest Management (IPM) is defined as "multiple tactics used in a compatible manner in order to maintain pest populations below levels that cause economic or unacceptable aesthetic injury without posing a hazard to humans, domestic animals, or other non-target life forms." (Voigt and Fermanian, 1998).

The definition of a pest is;

1. an annoying or troublesome person, animal, or thing; nuisance.

2. an insect or other small animal that harms or destroys garden plants, trees, etc.

IPM is a system which uses different control methods to keep pests from reaching harmful levels, whilst minimising effects on humans and the environment. It is a system that uses pesticides as a last resource and uses best management practices (BMP) first. This could be by either cultural or biological methods.
Cultural operations are the most effective IPM methods by carrying out mowing, irrigation, fertilising, and aeration correctly.

Biological is the introduction of hybrids that are pest resistant, or the use of nematodes, fungi, or parasitic insects to control pest organisms (Voigt and Fermanian, 1998).

Threshold is the benchmark at which a pest shall be treated. Thresholds should be determined at the start of the IPM system. Darlington (2009), suggests that costs can be saved depending on what thresholds are selected. He also states that it is essential to have well trained staff that recognise issues as they arise and report them back to the decision maker.

Field Scouts are key elements of an IPM system. They are the individuals who go out and monitor the surface. This prevents calendar applications of pesticides. It is vital that the scouts have a good knowledge of pests and their life cycles. 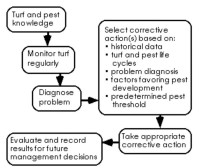 The flow chart shows the tasks that should be carried out within an IPM programme. The first four stages need a scout to carry out the process. The scout must be given enough time to cover all the turf areas. They also need to be competent, dependable and committed. The longer they carry out this role the more experienced they shall become with pest's life cycles and the thresholds the surface can withstand. The scouts must understand when the damage is likely to occur, the most susceptible stage of the life cycle for control, and how much pest activity can be tolerated before action must be taken.

Other employees at the club can take on the responsibilities of the scout's role when they are carrying out the day to day operations, such as mowing or switching, and then report back to the scout. Therefore, it is essential that the Grounds Manager or Head Greenkeeper keeps all their staff up to date with training to gain the knowledge needed to carry out scouting programme. Once a scout has been selected they have to decide on the methods to be used to identify the different pests.

Traps, like the cup trap above, can be used to trap insects to check on population. However, often the best way is to dig down and visually inspect the number of insects. It is important to have an understanding of the life cycle of the insect as this, along with the time of year, can affect the amount present. 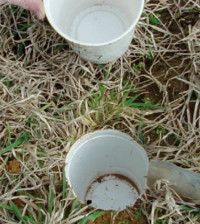 For diseases, the turf should be studied for irregularities and differences in colour. These should then be examined for signs and symptoms of diseases. Lesions on the leaves and the presence of mycelia and other fungal growth should also be searched for. Diseases on leaves may have to be collected and sent for laboratory examination if it is unidentifiable (Grant and Ferrentino, 2006).

Weeds are easiest to be monitored, as this can be done visually. All results need to be recorded at the time of observation. Field data sheets can be used.
It is recommended that scouts should record weather conditions such as soil and air temperatures, soil moisture, relative humidity, and leaf wetness. Measuring these weather parameters, and correlating them to disease development, could produce indicators to disease and insect activity (Menzies et al, 1994).

After the monitoring has been concluded, the scout will produce a report recording the site location and the sampling results, including ranking infestation. The report can then be correlated to the thresholds set at the start of the IPM system to determine what action is going to be chosen. This could be as simple as rising the height of cut for a couple of weeks to allow the plant to gain full health.

Regular scouting is essential, as it can provide information on changes in pest population and turf grass health. Ideally, all the turf should be monitored at least once a week, however, time does not often allow this, so highly susceptible and high priority areas can be used as indicators.

New European Union legislation encourages IPM systems. The ongoing decrease in pesticides available on the market, as well as training and sprayer inspections, means that IPM systems may have to be the way forward in the sports turf industry (Darlington, 2009).

IPM is a method that encourages best management practices rather than turning to pesticides all the time. However the key to IPM is the ongoing scouting of the turf, the setting of the thresholds and acting on the problem when necessary.