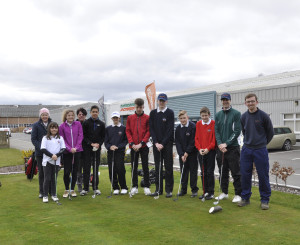 Their host for the visit was James Gotts, the greenkeeper on the RJ National, who had just returned from volunteering at Arnold Palmer's Bay Hill Invitational in Orlando, Florida.

After a tour of the course, where James explained the concept behind the three holes and how they were constructed between 2006 and 2008, the squad split into three groups and played a 9-hole tournament. This was followed by a buffet lunch in the Boardroom, before the squad split into different teams for a further 9-hole competition.

The final round was completed just as the rain began to fall, so the group returned to the Boardroom for prize giving. Prizes were presented to Connor Shenfield and Charlotte Gregory, and each team member received a commemorative photograph of their visit.

Thanking James Gotts for his time and hospitality, Sheila Laws, Junior Section Organiser said,
"We are really grateful to Ransomes Jacobsen for allowing us the use of their facilities. This is a fantastic little course and Ian, our assistant pro, was able to accompany each of the groups offering coaching advice as they tackled each hole. It might be just three short holes, but it is quite testing and over lunch we counted up and found that we had lost 15 balls in the first competition!

"Again, a sincere thanks to the company for hosting us and for the lovely buffet lunch."