by Jennifer Denby
in Industry News, Rugby, and Football
on 01 Mar 2015

0 Irrigation at Millennium Stadium new pitch gets the Toro treatment

The Millennium Stadium's heralded new pitch in Cardiff has been installed with Toro irrigation as part of its £3.1m development. 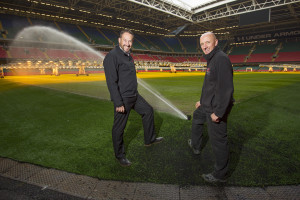 The inclusion of Toro's latest Lynx irrigation central control system and TS90 turfcup sprinklers form part of the pitch's transformation into a world-class surface for rugby and a host of other events.

"The old, big gun irrigation system used to take over two hours to run a cycle," he explains. "As we were having a Desso pitch, I wanted more flexibility. We did look at other options, but the construction of the new pitch limited us to a depth of only 450mm to play with - plus each sprinkler needed to be individually controlled.

"The first design came back with a row of sprinklers down the middle of the pitch. It meant having a sprinkler on the centre spot, which was unacceptable. So we looked at it again and went with another design, this time using 24 Toro TS90 turfcup sprinklers. With their long throw and overall sprinkler height, it meant we could do away with the sprinkler line down the centre."

As for the control system, Lee says he was looking for a controller that was easy to operate, partly because he was not the only one who would be using it. The decision to opt for the Toro Lynx system was made after distributor Lely UK demonstrated it and Lee saw what it could offer.

Lee explains: "The old box on the wall was a minefield to get around, so our main focus was on how easy it was to operate. We needed to start sprinklers and programs easily, without having to run back and forth to the controller. When you added in the remote access facility you get with Lynx mobile, and its reporting features, we were happy it would be perfectly suitable.

"We had a very tight deadline with the autumn internationals," he adds, "but everything ran smoothly - which is exactly what you need when the whole world is watching!"