Yet again, here we are in the middle of a long dry spell that hopefully will come to an end very soon. I suspect that a lot of people reading this will feel the same, especially if you have inadequate irrigation at your disposal as I do. I would even suggest that there are some out there who have none whatsoever. I am the only one at my club who is praying for rain!!

I write this as a Groundsman at a non league football club here in the Black Country. I have worked at Tividale FC for nearly five years now and have written a few articles about the pitch and the problems that I have faced over the years. I would like to submit this in the hope that some good may come of it in terms of bringing to the fore irrigation problems that we, and others face.

Around the same time last year we went through a similar spell with drought conditions prevailing. With two weeks to go before the first friendly back then I was panicking as the pitch was in an awful condition, even though a good quality end of season renovation programme had been carried out. It was difficult to apply fertiliser when necessary to help thicken the sward, as I only have a simple impact sprinkler situated on a sledge to irrigate should the drought conditions continue. I have seen pitches burnt due to them being fertilised without adequate irrigation afterwards. More on the sprinkler issue later. Fortunately the weather did break with rain eventually coming at the right time and all was well with the pitch subsequently.

I decided to modify my renovation plan for this year fearing the worst again with long dry spells forecasted by some weather experts. Soil sample results came back showing adequate phosphate levels but low levels of potassium. I decided to purchase 12 bags of Scotts 20:0:21 controlled release fertiliser that would potentially feed the grass throughout the close season. Although this type of fertiliser is generally more costly, it meant that at least I could get away with applying once instead of the two applications that I had carried out in previous years. The idea being that the fertiliser would break down and feed the grass as and when the weather changed, thereby me not having to worry unduly about the forecasted dry weather.

Initially, I applied 12 bags of a Scotts 9:7:7 fertiliser just to kick things off following top dressing and seeding, then followed up two weeks later with the application of the 20:0:21. After an initial colour up and growth spurt, one of the dry spells hit and the grass did absolutely nothing. I can only really concentrate on watering the more important areas such as the goalmouths and centre areas due to the sprinkler that I have. That, and the fact that our club is metered, so that is always on my mind as far as costs are concerned. A club like ours have to watch every penny.

These areas then picked up well and the sward began to thicken. However, the rest of the pitch was suffering greatly. Due to the fact that I had my 36 inch Dennis in for repairs, I was cutting the pitch with my 4 foot Wessex rotary mower with the height of cut set at about 2inches (I will be glad when my Dennis returns, as the lack of exercise has done my weight no good whatsoever!). This was ideal at the time as the grass started to get stalky as it always does at that time of the year. This just led to the grass being flattened as cells within the grass remained flaccid. 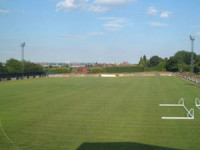 I still have a few weak areas that I feel will not be ready in time for the first game next week, which is annoying. With the annual pigeon problems in mind I convinced the club to allow me to get a better quality grass seed for renovation that germinates quickly. It, like the fertiliser was more costly but I felt that it was vital to get seed establishment as soon as possible. I therefore purchased Advanta MM60 grass seed. It did "exactly what it said on the tin" by germinating in five days. This obviously helped with the pigeon problems to a degree.

Just when I thought that the pitch was going to be worse than last year in terms of drought, the forecast was for thunderstorms and heavy rain coming in. I again convinced the club to put their hands in their pockets. I felt that the sward needed an immediate boost of nitrogen to thicken it up quickly. 12 bags of Scotts 12:0:9 were ordered and thankfully were delivered without delay. So, thanks has to go to Julie Wall and Avoncrop Amenity Products for their excellent service.

The forecast for that particular Tuesday was thunderstorms gradually creeping up from the southwest that were due to hit us by evening. I couldn't wait to finish my regular day job that day (I work part time at the club) to enable me to get to the club to get the fertiliser on. As I had striped the pitch over the weekend, the mowing bands were used as my guide. I placed out the bags ready and set about the task. With two bags to go I could hear the thunder in the distance with the odd flash of lightning catching my eye. For someone who has a bit of a phobia about lightning strikes, it was a bit unnerving I can tell you! Within an hour of me finishing, the storms hit and the rain began. How about that for timing?! Within a few days the pitch began to respond and with regular mowing, thickened up a treat. At times I was cutting everyday until, low and behold, yet another dry spell descended upon us. 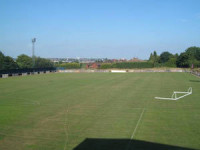 Around this time we had organised for someone to come to the club to give us advice on possible rebates on water application. I met Andrew Willis from the company Auditel (www.auditel.eu.com) on a very warm and dry Monday evening, which was very apt to say the least. He specialises in attempting to save clients money in the utility areas such as energy, fixed/mobile communications, water etc. He took meter readings before and after a timed period of irrigation. We then sat down to discuss how often I use the sprinkler. For obvious reasons this was a difficult question for me to answer. We agreed that a conservative estimate of watering three hours per day over a seventeen week period was a fair assumption. Based on this fact, the cost of watering is £1.44 per hour. This equates to £514 per annum. Further to this, I have recently had an e-mail from Andrew to let me know that we are due an inspection from the water company technical expert in the forthcoming weeks. This is great news for us as any potential saving on outlay is beneficial to the club.

All the above leads to what I wish to add from here on in. A lot of clubs, especially at our "grass roots" level, generally have to keep a keen eye on income and expenditure. Many have to rob Peter to pay Paul. This season I was asked to try to save the club £1,000 to pay for new goalposts and nets for the new season. I did manage to do so by various means, although certain things have suffered as a result and it cannot happen next season. Although the above figures are estimated the costs could quite easily be higher, especially if the summers of the future are longer and hotter as some experts predict.

As a club we are now having to look at ways and means of saving money in all areas and not just applied irrigation. I look on this level of football as the feeder route to higher level football and so it is essential for us Groundsmen to provide as good a surface as possible with the means available to us. I recently visited a local professional club and was quite envious of the fact that the Groundsman there had sprinklers all over his pitch ready for use, and his pitch looked superb. And here's me with my one sprinkler!

Don't get me wrong, without it, the pitch would be awful. There are travelling sprinklers that are available for use with domestic water supplies such as ours but again the cost implications come into the equation. The more water that is used, the more it costs the club. It's as simple as that. We are now having discussions about redirecting rainfall from stands and buildings within the club to a container of some sort. Once collected, it can then be utilised on the pitch. In my three year tenure at Willenhall Town FC, I was fortunate to have a very large tank situated behind one of the stands. This collected rainwater from the roof of the stand and I was then able to use a conveniently situated pump to get water onto the pitch. In drought conditions I had no option but to top up the tank with the mains water supply but, without the tank, their costs would have been a lot higher.

I would like to see clubs at and around our level being helped in some way, whether it be help towards costs such as watering our pitches or funding in utilising rainwater in order to help give our players the best possible surfaces to ply their trade. This could even expand to our schools where some surfaces are an absolute disgrace. Some are so bad that injuries are just waiting to happen. But that's another story. 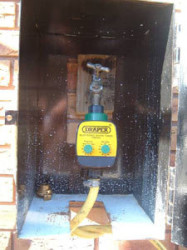 In terms of physiology grass is no different to humankind. We can both do without food for a period of time but we cannot survive without water.

As an industry, at whatever level, we need to help each other in this matter. Can someone tell me where the answer lies? Maybe I am missing something that is obvious and is staring right me in the face. I fully realise that water is a valuable and essential commodity and we have to respect it and waste as little as possible. But, with the threat of hosepipe bans seemingly always lurking around the corner, what are our pitches going to be like without being able to water them adequately through restrictions or complete blanket bans?

Like so many other people in this industry of ours, the vast majority do not wish to see artificial surfaces take over our natural grass surfaces. I recently asked playing members of staff at our club what was their preference. Each and every one was in favour of grass. They even had reservations of training on artificial surfaces although, from a personal stand point, I would much rather they do that than do what they do now by training on the pitch twice a week.

In closing this article I would like to politely urge anyone who has read it, to give me or anyone else any information whatsoever that may benefit the surfaces that we work on, whatever the sport. Good luck to all of you for the forthcoming winter sports season.

Photo 1: My irrigation system in action!! Bless her.

Photo 3: The difference in pitch quality in less than a week due to drought conditions.

Photo 4: My automatic timer. Basic but what a Godsend!