2 Is ‘Augusta Syndrome’ a thing of the past?

With the effects of global warming, parts of the UK are already experiencing weather conditions that are allowing golf courses to be presented to much higher standards than was ever envisaged before, even as early as February. So, has the 'Augusta Syndrome' already become a thing of the past for many of today's Greenkeepers in the UK?

April is just around the corner and with it comes the Augusta National U.S. Masters golf tournament which is televised all around the world. This one event alone kicks the golfing world into action.

Historically, Augusta has appeared on TV in all its immaculate glory just at the time when UK golf courses have had to contend with cold winds, cold ground temperatures and limited grass growth, (albeit that the sun may be shining).

The criticism of the comparatively poor condition of their own courses created by many a UK club golfer often left British Greenkeepers on the back foot feeling a need to defend themselves against why British golf courses couldn't be presented in better condition as early in the year as April. This has become commonly known in the industry as the 'Augusta Syndrome'.

But, with changing weather patterns, are we so far away from reaching the point where our golf courses can look as well prepared and ready for play as Augusta, perhaps even in the months of February and March? If this year is anything to go by, then the answer to this question could arguably be yes.

"Not so", some might say, and it is fair to say that many courses have their share of problems to contend with, such as poor drainage, shade from trees, persistent rainfall, and the affects of unmanaged wear and tear from traffic.

But, more and more clubs have addressed these issues by investing in drainage schemes, tree clearance work, trolley paths, and reconstruction to enable the courses to remain open and playable throughout the year.

Greenkeeping practices are also improving the duration of the playing season by using improved modern aeration techniques, more frequent and regular top dressings, and the improvement of drainage systems, in order to achieve their goal of all year round golf on free draining surfaces.

Whether you take global warming seriously or not, it is clear to see that weather patterns have significantly changed in much of the UK to the point where it is possible to offer well presented courses much earlier in the year than was the norm a relatively short time ago. With this comes a new set of issues to deal with, such as when to book up for machinery services and the potential increase in cost for winter mowing and maintenance.

Diary date 10th January 2007: Daytime temperatures forecasted to be up around 13 degrees Centigrade in the south of England (which coincidentally is the same as Portugal) and there is concern at a local golf club about when to send the mowers away for winter servicing because the grass is still growing.

Diary date 31st January 2007: As I stepped out on to a golf course in the Midlands, most of the golf course had been mown (due to necessity), and was well presented.

In light of a promising 10-day weather forecast, it was agreed to schedule work so as to present the golf courses in tiptop condition in accordance with the actual weather this year, rather than the calendar. Various presentation jobs would therefore be carried out two to four weeks ahead of last year's programme.

Diary date 5th February 2007: I visited a top class Pay & Play course to see how the A4 Creeping Bentgrass greens were performing. It was a sunny day, albeit there was a cold nip in the air (3 degrees). Overnight frost had lifted by 9.00am on all open areas of the course. The greens were firm and putting was true and fast. The Course Manager told me that he was mowing the greens at a bench setting height below 3mm and the green speeds were between 9 and 10 feet.

Is this an indication of what will be expected as the norm in 5-10 years time? (Albeit that the budget required for a high level of maintenance for A4 is not affordable for the majority of U.K. courses).

Maybe it won't be the norm, but it will be difficult to argue that the Augusta Syndrome relates solely to weather in the U.S.A. when we have clubs managing to achieve similar standards in the London area.

And that's not to mention many of the well drained links, heathland and downland courses in the U.K. where all-year-round play is achieved. Are maintenance costs set to rise here too, as standards of daily presentation increase?

What other extraordinary situations might we expect in the future on British golf courses?

If we are to believe the 'facts' we are told about climate change, an Apprentice Greenkeeper starting in the industry today could well see a some massive changes on UK golf courses in his or her lifetime.

How much hope do we hold out for low-lying golf courses in East Anglia or in the Thames flood plane, that may be underwater in 50 years time as tides continue to rise and the South of England keeps sinking? Will the Thames Barrier be able to hold back the tidal waters from the courses in Central London, or is there a chance they could go the same way as New Orleans? And how many links golf courses will suffer from serious coastal erosion problems?

So what of the Augusta Syndrome? Is it already a thing of the past? If this year is anything to go by then the answer is Yes, particularly in the South of England. We are now able to achieve those presentational standards on golf courses, which meet our golfers expectations and keep the vast majority of the paying members and visitors happy. Giving golfers what they want (in terms of good presentation) is a key requirement at every golf course in this day and age. 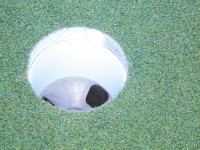 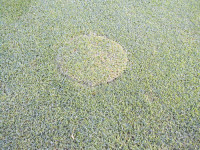 Hole changing is one area in need of attention on the vast majority of golf courses, especially where more than one person is changing holes on the same course. It is not good to find hole changing plugs that have been scalped or are highly visible because they are too high or too low. If this is the case, then extra training is needed to ensure this becomes a thing of the past. A simple tip for bunkers is to reap the benefits of getting bunkers properly edged and topped up with sand in January or February, a full two months ahead of Augusta being on TV.
Directional raking of sand towards the hole/flag is a presentational tip that is easy to achieve and is a nice feature if it is done well.
Knowing that the consistency of bunkers is a highly emotive topic for the majority of golfers, there can be a good argument for allocating more man-hours which could justify employing additional labour on a golf course to achieve high standards on a regular basis.

It remains my opinion that the great thing about golf courses is that each is unique. The challenges of each individual course, its aesthetics, its setting, the way it looks and 'feels', is what gives each course its individual character. And, the way they are managed and maintained is what keeps the body of the course alive in the eyes of those who play it.
Therefore, one thing we all need to concentrate on, irrespective of the location, is the attention to detail and daily presentation of the course on an all-year-round-basis.
It is true to say that one of the great things about Augusta for me over the years has been the reluctance to stand still in terms of presentation. The course seems to re-invent itself each year with subtle changes in terms of presentation. Can we match it here, or even do better?

Peter Jones is an Independent Consultant Agronomist, a Patron of FEGGA and a member of RIPTA. Tel: 01525 280 573 E: pjassociates@clara.co.uk