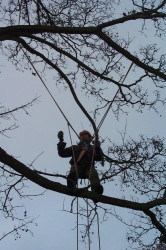 Controversial health and safety rules could see thousands of trees, where the public have access, chopped down unnecessarily say Landscape Planning Ltd.

Under draft safety guidelines drawn up by the British Standards Institution, every tree in the country would have to be inspected by a 'trained person' every three years and by an 'expert' every five years to make sure they do not pose a danger to passers by.

Owners would also have to inspect every tree on their land at least once a year, the BSI said. A hazard to public health? Although trees and humans have lived side by side for thousands of years, the BSI is recommending a yearly inspection. But the Government's red tape tsar described the guidelines as unnecessarily bureaucratic and costly, and warned that they would lead to the destruction of thousands of healthy trees.

The BSI, an independent standards body, currently has 27,000 standards, covering everything from the size of rivets to accountancy. It makes money by selling the standards to companies and organisations and then inspecting them to make sure they are following its rules.

The decision to draw up standards for trees follows concerns about Britain's growing compensation culture.

In 2006, motorcyclist Gary Poll claimed against a landowner after he was injured in a collision with a fallen ash tree in the road. The judge ruled that the accident could have been avoided if the owners -Viscount and Viscountess Astor of Morley - had called in an expert to check the tree.

Although the BSI's standards are not legally binding, a landowner that doesn't meet them could be vulnerable in a similar court case. The recommendations come despite the low risk of injuries from trees. Around six people are killed every year by falling trees while some 640 people die each year from falling down stairs.

Rick Haythornthwaite, chairman of the Risks and Regulation Advisory Council, a body set up by Gordon Brown to challenge pointless red tape, said the rules were too strict. "The draft standard has been put together by a rather narrow group of aboriculturalists and tree surgeons who stand to gain from its adoption, while the potentially enormous costs would have to be met by tree owners," he said. "The risk from trees has not increased.

We believe the existing legal principle effective for the last 60 years is sufficient. This is a perfect example of how the pressure to regulate in order to minimise public risk can lead to wholly undesirable outcomes if left unchallenged."

Errol Taylor, deputy chief executive of the Royal Society for the Prevention of Accidents, said: "It makes sense to have standards for looking after trees, but the idea of stipulating that you must get a tree inspected on a three year cycle is probably over the top, especially for organisations like the Nati

onal Trust or the Forestry Commission."

Tree lovers are increasingly concerned about the threat to trees. Around 40,000 trees have been chopped down in London alone since 2003, many because of fears of health and safety claims. Tree surgeons rarely charge to inspect a tree. However, if call outs became routine, they are likely to charge around £70 a visit.

Under the current health and safety rules, trees do not have to be inspected if the risk of death is less than one in one million each year. A spokesman for the BSI stressed that the standard was still out for consultation and would never be legally binding. "We are not suggesting that everyone goes out and buys the standard," he said. "But, people who have a tree in their garden and want to understand what their duty of care is can at least get an idea of what the standard is."