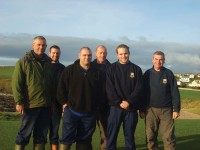 Yes, that's him on the right!

Climate change, demanding members, a ridiculously full fixtures list, a small staff and a course over 100 years old that wasn't designed for large machinery - all these are familiar challenges for many head greenkeepers. Add an annual influx of golfing holiday makers and the maintenance of ten grass tennis courts and three public beaches to the list and you have some idea of the demands on Vic Dyer, Course Manager at Thurlestone Golf Club in South Devon. Somehow he manages it all, expertly, and still remains keen on the job and in love with his course.

"We are an 18-hole links/cliff top course with terrific views," he says. "We've got sand based greens and the links section, a third of the course, is all sand. Everything drains well and we often stay open here when everyone else is shut."

Vic has found the last two wet summers, and climate change in general, good for the course. "If we get a hot, dry summer followed by a cold autumn the grass doesn't get a chance to recover," he explains. "But the last two years, with wet summers and warm weather in the autumn, have given us good grass to go into the winter."

Having lived in the area all his life, Vic remembers when the pipes used to freeze up. "They don't any more but we get gales from autumn onwards, which means that we can't spray, not even with shrouded booms. This course was designed in 1897, part of it is on a slope, the tees are built up and the greens, like the rest of the course, were not designed for machinery."

In the autumn Vic and his five greenstaff (two of whom are his sons) use a spot weedkiller on the greens and, in winter, they pull the weeds out manually. "If you do it quite often it's not bad. We repair the pitch marks and pull the weeds out at the same time," he explains. 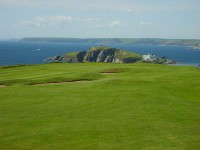 Milder winters, coupled with the impracticality of sprayed weed control in the autumn, means that, by early spring, weeds on the tees can need attention. "We use Headland's Relay Turf, tank mixed with just two bags per hectare of their soluble Xtend (46:0:0) as an economical weed and feed, which lasts about six weeks. Spraying with herbicide puts the grass under stress, but Xtend helps it recover," he explains.

Vic is keen to encourage strong establishment in the spring and feeds greens with a 'starter' fertiliser. "We use Greentec Mosskiller 4:0:10 with 9% iron as a bit of a pre-season kick," he continues, "and maybe repeat the application four weeks later."

The general fertiliser regime is dictated by the results of analysis following annual soil sampling carried out by Headland's Adrian Masters. "I'll send in my report, which Vic then discusses with his agronomist, and everything goes on from there," he says. "This is a popular course and everything has to be 'top whack'."

Thurlestone is situated in a wealthy catchment area and has over 800 members and a long waiting list. The village consists of 65% holiday homes, all in the higher price bracket. Once the season starts their owners descend on the area, some of them by private helicopter. Most of them play golf and this puts more pressure on Vic and his team. "Our members and visitors like fast greens. Years ago we would scarify twice a year in spring and autumn but now, in summer, we scarify the greens every ten days and verti-drain once a month." he reveals.

The greens and fairways are cut every day and the rough about once a week. A granular fertiliser (Vic doesn't use liquids) is applied just once in summer and again in autumn.

As well as golf, the club also provides tennis and owns ten grass courts, which are maintained, during the season, by an extra, part time member of staff. But, if a court is booked early in the morning, it's up to Vic's greenstaff to mow and mark out. On top of everything else Vic has three public beaches to look after. "They are on our land," he explains. "The local council used to clean them, but they've cut back. We have to keep them tidy for the holidaymakers, so I'll send a couple of the lads down twice a week with litter tongs, black bags and a tractor. In winter we only go occasionally, before the Christmas holidays or half term." 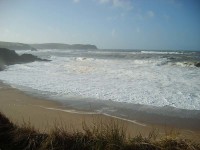 By October, the fixtures list has shrunk from the in season 'one competition a day' to one or two a week, and Thurlestone receives its second topdressing of the year, the first of which was in spring.

As the autumn and winter gales arrive to batter Thurlestone's 300 acres the greenstaff, some of whom have been putting in 10 hour plus working days, shorten their hours. "He hasn't got a massive team but they're very loyal," says Adrian Masters.

"I think," he says "like everyone else in this business, if you're not keen and quite happy, you'd wonder what it's all about." Thankfully for Thurlestone golf club, he is, and he doesn't!