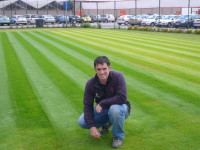 The first field trials ever conducted in Britain on a new form of coated seed have brought dramatic results.

Findings from tests conducted at a test match cricket venue on DLF Trifolium's innovative iSeed coated system have overshadowed those of a competing, non-coated, mix.

In trials undertaken by Matthew Merchant, Head Groundsman at Old Trafford, home of Lancashire County Cricket Club, iSeed - launched at Harrogate Week in January to wide acclaim - generated a thicker sward and a richer, deeper green that was maintained for far longer during the weeks following germination.

The iSeed is the first system of its kind to coat seed with full strength fertiliser, which is designed to kick-start post-germinative growth, nourishing just the new plant, not the existing sward or any weeds that may be present during overseeding.

DLF, the world's largest grass breeder and producer, has launched iSeed under its Johnson's brand across a spread of sporting applications, including golf and football as well as cricket. The Old Trafford trials mark the first field tests on iSeed since it was unveiled in Britain.

Keen to test the new product, Merchant called in DLF in March to gauge how it performed against a non-coated mixture. Taking Old Trafford's practice areas as his testbed, Merchant sowed Johnson's Ji Premier Wicket in strips running side by side with a comparable non-coated competitor's seed.

"We trialled the two mixtures firstly on practice wicket strips for a week, using germinating sheets and our new lighting rigs bought to aid growth," he explained. "After seven days, we removed the sheets and found both mixtures were showing a similar colour and growth rate, so decided to return the lights for a few more days, continuing to water both at the same rate."

"It was then that iSeed really took off and began to flourish. Compared with the other seed, which started to yellow off, the iSeed seemed to get a second wind at 10 days and we saw a huge difference in thickness, colour and coverage. We sowed each mixture at the same rate, which meant that there was actually fewer seeds of the Johnson's mix because of the coating on them, so the results are especially satisfying."

The reason behind the surge in growth compared to a non-coated mix comes down to the way the seed utilises the fertiliser coating, revealed John Hughes, DLF's Northern Technical Manager.

"Phosphate nutrients - those in fertilisers for example - are generally immobile, so the coating enables such nutrients to be used exactly where the seed wants it, without the need for any additional fertilisers in the early period of growth."
He added: "Our coating has undergone extensive research to ensure it is not phytotoxic, while it also helps to reduce the additional costs associated with the further feeding that regular seed requires."

The difference between the two seed-types trialled was most startling in the larger test area Merchant employed to sow them adjacently in blocks. "The sheer difference in greenness gave a clear impression of light and shade," Merchant said. "After ten days, the contrast was so great that I decided to overseed two of the four competitor's seeded strips with iSeed to bring them up to a comparable colour.

"After two weeks of growth, we'd never usually expect coverage as good as this," he added. "The results we found with the iSeed would be comparable to another full overseeding with a non-coated seed, and even then the colour would not be a brilliant as this - we're extremely pleased with the results."

John Hughes concluded: "In what are testing times economically for everyone, the trials prove that iSeed can deliver a highly cost-effective solution for turfcare managers, reducing outlay on fertiliser and seed because of its degree of coverage and targeted nutrients."