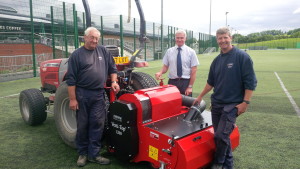 Voted as 'University of the Year' by The Times and The Sunday Times Good University Guide 2016, The University of Surrey has a leading reputation for teaching and research, supported by outstanding facilities delivering student satisfaction. To help them maintain their Synthetic Surfaces they took delivery of a Redexim Vert-Top 1200.

Horticultural and Landscape Manager, Nigel Hodge, has been at the university for over 31 years. He is responsible for all sports facilities, ponds, lakes and grounds in and around the main campus, sports-park and research park as well as contractual work at Guildford Cathedral - a total remit of 250 acres!

Nigel says, "Over the years there has been big changes at the site, one of which was the introduction of synthetic turf pitches. We now have 3 of them: 2 with rubber crumb and the other is sand-dressed. They have become very high-use, multi-sport areas used for hockey, football, rugby training and a large amount of lacrosse, not only by the students but also by a local private school. To add to that Harlequins Rugby train here as well as local football clubs. Coordinating a contractor to come in and do the maintenance of the surfaces around their usage was becoming difficult without closing them - not to mention the costs involved."

In order to maintain the synthetic surfaces at time convenient to themselves, the University took the decision to purchase their own kit. Not only were Charterhouse Turf Machinery nearby, but Nigel had heard good things about the Redexim Verti-Top 1200. However, it still took him 3 'looks' before taking delivery in May 2014! Nigel again, "We made the right choice. Curtis Allen of Charterhouse was great, taking the time to ensure we were fully trained to get the best out of the machine. The Verti-Top uses a rotary brush to lift the pile and extract up to the top 15mm of infill and foreign material. The infill is then sieved to remove dust and detritus before being returned and brushed into the surface leaving a clean, level and aesthetically pleasing finish. Though cleaning is dependent on the weather and the demands on the pitches, having our own machinery means we can even clean the pitches while they're in use - we can keep two-thirds playable while we clean the remaining area, then move the play to the cleaned surface area. Having the Verti-Top has given me and my team ultimate flexibility and versatility."