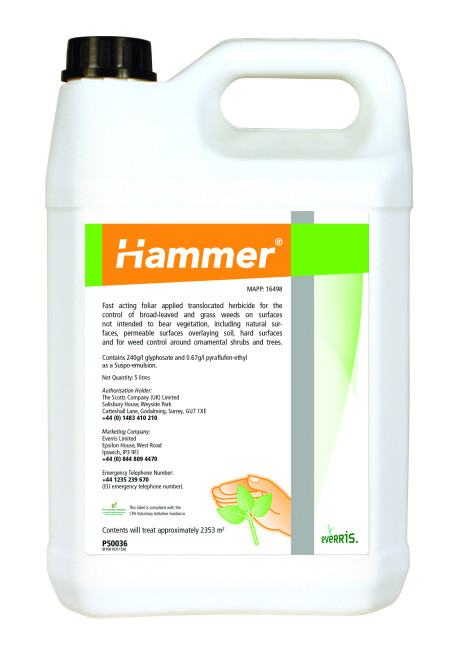 Hammer, a total herbicide which delivers effective weed control, has received approval to be used on hard surfaces by The Chemicals Regulation Directorate (CRD).

With an increasing amount of pressure being put on landscape contractors and amenity professionals to keep their sites weed-free, Hammer is the number one choice for those wishing to see immediate results and an end to their weed invasion. Hammer's war on weeds is now set to become more ferocious after the CRD approved it for use on hard surfaces - meaning that it can now be used on a much wider scale.

The unique formulation was developed and fine-tuned in-house by scientists who made sure the two actives worked in synergy, creating a product which gives a quick knockdown from the pyraflufen-ethyl, whilst still allowing the glyphosate to move systemically through the plant. Hammer was then put through a rigorous two-year trialling period.

Pyraflufen-ethyl perfectly complements the glyphosate active ingredient and each has unique combative qualities of their own. Within 24 hours, visible signs of destruction are apparent due to pyraflufen-ethyl's rapid action of blocking the production of essential acids which inhibits the enzymes that drive photosynthesis. The systemic action of glyphosate then completes the kill and eliminates further growth.

Rain-fast within six hours, Hammer is approved for tractor-mounted boom, walkover and knapsack application. It is best applied post emergence during the active growing period of weeds between April and September. It controls a broad spectrum of annual and perennial weeds, including the stubborn brush weeds, bramble and bracken.

Originally for use on natural surfaces not intending to bear vegetation, permeable surfaces, overlaying soil and areas around ornamental trees and shrubs, Hammer has now been upgraded to a wider use following the approval. The high impact, quick knockdown herbicide is now set to take its war on weeds to a number of hard surfaces such as roads, industrial sites and gravels.