0 It's a Chilie Update

The International Turgrass Society (ITS) is a group of about 200 or so turfgrass scientists from around the world who meet every four years in a different corner of the globe to present and discuss the latest findings in turfgrass research. It has been 40 years since the first conference in Harrogate, UK and 20 years since I attended my first ITS conference in Tokyo as a young turfgrass scientist in 1989. The International Turfgrass Society Research Conference represents the best opportunity for turfgrass scientists, researchers, consultants and professionals to meet on the global circuit - and you need to be prepared for a few days of intense science.

In one respect, the Society is similar to various turf manager associations such as the NZ Sports Field Forum Inc. in that the organisation exists to encourage research and education in turfgrass science and to disseminate technical information. The Officers and Board of Directors who run the Society are also entirely volunteer-based. However, there the similarities end. The main purpose of the ITS is to produce the International Turfgrass Society Research Journal (as well as regular newsletters) - that's what is covered by your membership fee. Originally published as an unrefereed proceedings of each conference, the Journal has now matured into a peer-reviewed scientific publication, with each publication typically containing around 1200 pages printed in two volumes. The publication of the Journal requires a huge amount of effort to organise, including finding an editor-in-chief, 15-20 co-editors (I've been one of those for eight years and believe me, it's no small amount of work) and typically around 150 or so peer reviewers - all voluntary.

It's hard to imagine how conference organisation was possible before email (although I do remember using a type-writer, an envelope and the postal service for the first conference I attended - we had more time in those days!).

This conference was the first one to be held in Latin America. In some ways, Santiago was similar to the South Island of New Zealand - crisp winter days with snow capped mountains in the background (the Andes) and similar grass types to be found, set amongst some spectacular scenery in a mediterranean type climate.
As with the recent NZ Turf Conference & Trade Show held in Auckland this year, there were some concerns about how many people would actually turn up, given the current economic climate and rumours circulating that some of the US universities might restrict conference attendance. Fortunately, fears were unfounded and the conference was well attended with about 150 making the trip for the five days, the majority of whom were from the USA.
In contrast to the last few ITS conferences, I was the only delegate from New Zealand attending and I felt a little bit like how GS Robinson must have felt when he attended the first conference in 1969 as the only representative from New Zealand and gave a talk on The New Zealand Turf Advisory Service. I gave two presentations (one oral and one poster), both being on the research work that has been carried out by Sports Surface Design & Management on the new stadium in Dunedin.

Poster sessions - a good way to achieve a level of discussion that is often not possible with oral presentations.

Overall, the conference consisted of 52 oral presentations, 53 poster presentations, three invited papers and 31 technical papers covering a wide range of subject matter including weeds, pests and diseases, conservation and environmental quality, establishment and maintenance, genetics and breeding, information technology, turfgrass physiology, turfgrass nutrition and soil fertility, and soil physics and rootzone construction. To break the sessions up, a field trip was held in the middle of the week where various turf facilities (and the occasional vineyard) were visited.

National Stadium, Santiago, Chile. This 64,000 seat, multi-use stadium was used for the 1962 Football World Cup and more recently for a Madonna concert in December 2008. It is a soil-over-gravel field design with a couch/ryegrass ground cover and a very imaginative herringbone drainage system (see photo below). The natural rainfall for the area is only 300 mm per year, but the intention is to remove the soil rootzone layer and replace it with a sand-based rootzone - perhaps because that is what is perceived as the best solution overseas?

The intricate herringbone drainage system for the National Stadium in Santiago.

Club Hipico de Santiago - this floodlit racetrack hosts 90 meetings per year, with each meeting involving about 17 races, equivalent to a staggering 23,000 horses galloping over the track per year. The ground cover is a mixture of tall fescue and perennial ryegrass, with a small amount of kikuyu present. Seeding rates of up to 1000 kg/ha ryegrass are used. The damage caused by racing is understandably severe, with heavy road rollers being the only practical way to provide a safe surface once the grass is worn away (see photos below). 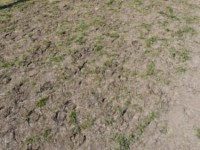 Preparing the surface for the next race.

The Australian/NZ contingent - the balance was definitely in favour of the Aussies!

Attending an international conference is always an interesting and worthwhile experience - new cultures to be discovered, new information to be gleaned, old friendships to be renewed and new friendships to be made. And you always come away from such a conference with an understanding of something you have never previously thought much about. For this conference, I had little appreciation of how hard the interpreters had to work translating technical turf talk from English into Spanish - they told me afterwards that it takes many more words in Spanish to say the same thing in English - no wonder they struggled with some of the fast-talking English speaking delegates!

And of the 80 or so delegates who had attended the first conference in 1969, there were only two turfgrass scientists left who had been to every ITS conference since and who also came to Chile - these were Prof. Bill Adams from The University of Wales in Aberystwyth and Dr. Richard Schmidt from Virginia Tech, USA, both now retired. For the first time, another regular attender and founding member of the ITS, Dr. Jim Beard, was unable to make it for medical reasons. The next conference will be in 2013 in Beijing and in 2017 the conference will return to the USA - it will be a turning point in the history of the society when none of the original pioneers of the International Turfgrass Research Conference are able to attend.

And finally, if any of you think that being involved with the organisation and attending these sorts of conferences is a relaxing alternative to full-time sports turf consultancy, I spent the week organising and chairing over seven hours of meetings in my capacity as Vice-President and I'll no doubt be doing the same thing again in four years time in Beijing in 2013. I'm still trying to catch up the time.


Background to Sports Surface Design & Management (SSDM)
SSDM is a sports surface consulting organisation based in Auckland, managed by Dr Richard Gibbs. The consultancy supports suppliers, managers and users of natural and artificial sports and recreational surfaces to enable them to plan, design, build and maintain their surfaces to the most appropriate standard within the resources available. Richard has twenty-three years' sports surfaces consultancy expertise and is well recognised as a leading authority in the industry at national and international level. Richard's current and past professional appointments include: Vice President and Director, International Turfgrass Society; Chairman, Sports Field Forum NZ Inc; Honorary Research Associate, Massey University, Palmerston North.

Richard can be contacted on richardgibbs@ssdm.co.nz Background to the NZ Sports Field Forum

The NZ Sports Field Forum is dedicated to the sharing of information about all aspects of sports field maintenance and administration. The Forum began in Auckland in 1993, when Bruce Paton, a Sports Parks Officer with Auckland City Council called the first gathering of sports field officers from several of the councils in the Auckland Region. The Forum became an Incorporated Society in October 2002, and now has a membership of almost 200 people from throughout NZ, located from Kaitaia to Invercargill. Membership is drawn from contractors, schools, stadiums, consultants, sporting organisations and councils. Membership is free.

Members receive the Forum's bi-monthly newsletters, news flashes, job vacancies, and invitations to Forum field days, seminars, as well as the New Zealand Turf Conference & Trade Show held every two years.
If you have any questions regarding the Forum, or are interested in becoming a member, please email the newsletter editor, Bobbie-Jo Harvey, on sportsfieldforumnz@gmail.com