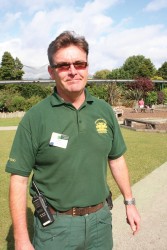 When a press release titled "Specialist turf for zoo" landed in our editor's email inbox he was off on a 'wild animal chase', before you could say "boo to a zebra" to find out more.

The zoo in question was Chester, one of the UK's most popular attractions, with over 7,000 animals made up of 400 different species, including some of the most endangered on the planet. Over one million visitors pour through their gates each year.

But, the zoo isn't just an amazing collection of animals, it also has award winning gardens. The Andes Garden, as its name implies, shows the terrain and range of plants from the Andes Mountains in South America, whilst colourful planting schemes can be seen everywhere.

On the site of the former Rose Garden a new garden has been created which highlights the beauty, usefulness and diversity of the grass (Graminae) family. The garden, which is 70 metres long and 30 metres wide, is divided into five main sections, each of which features a selection of grass species that are of major importance to humans. These are the economic crops, bamboo, sand dune grasses, ornamental grasses and, perhaps surprisingly for a zoo, turf grasses; the zoo's philosophy being that, whilst they are often taken for granted, they are used extensively in our urban landscapes, in our parks and gardens, and are still the main surfaces on which outdoor sports are played. Therefore, displays of different grass mixtures are grown for the public to make comparisons.

As well as the grass plants themselves, the area has been attractively landscaped and features a boardwalk running alongside the canal, large boulders and stones, a central seating area and a suitably thatched wooden roundhouse in which the public can sit and relax. Throughout the garden there are a range of interpretation boards informing the public about the usefulness and diversity of this amazing family of plants.

This exceptional approach to the environment and education meant that Chester Zoo were the first in the UK to have been awarded the environmental standard ISO14001 - a clear commitment to the cause.

The conservation of animals is dependent upon the protection of their habitats too. Within many of the animal enclosures an environment is created to reflect the natural habitat in which the animals would live in the wild, thereby further educating the public about conserving both flora and fauna.

Looking after this extensive site is Mark Hargreaves, the team leader of the Horticulture/Botany department. Mark has spent over thirty years working at the zoo, where he began as an apprentice gardener, gradually working his way up to his present position.

They manage all the day-to-day maintenance requirements of both the indoor and outdoor landscape features.

Mark is keen to promote environmentally friendly practices by using materials and techniques that are energy efficient and sustainable. This includes composting all green waste, which is then used as a mulching compound for beds and borders.

Staff begin work at 7.00am and finish at 4.00pm. The early start allows the staff to get the site tidy and presentable before it opens at 10.00am. No mowers or machinery can be operated during opening hours.

Lawn areas are generally mown on a weekly basis, however, if growth is vigorous they may need to mow twice. Mark is

currently looking into buying a front mounted rotary deck to reduce the time spent mowing. Currently, it takes a week to mow all the grass areas and it is expected that the out-front rotary will reduce that to three days, thereby freeing up some valuable man hours.

The lawns are one of Mark's biggest challenges as they form some of the main pedestrian routes to the various attractions whilst, at the same time, providing much needed aesthetic and recreation value. With one million visitors trampling across it, wear and compaction are big problems.

azel Frith, from All Turf, had been trying, for some time, to persuade Mark to give it a go, as she felt it was the answer to his problems. Eventually, he agreed to trial it on a heavy traffic area measuring twenty square metres. That was in October 2008. When she next spoke to Mark the following March she was pleased to learn that he was impressed and that RTF had "ticked every box".

The key to its success was that installation instructions were adhered to. Firstly, that RTF should be laid on a well prepared surface, avoiding compaction and poor drainage. Secondly, that the mowing height should be higher than a standard amenity grass - at about 50mm and, thirdly, it should receive regular and adequate nutrition with a strong emphasis on potash, particularly going into the autumn and early winter.

Following the successful trial, during the spring months Mark returfed several other grassed areas totalling over 1,500 square metres. He was equally impressed with the turf's performance, particularly on a 900 square metre area outside the Condor Aviary that gets quite a hammering from children playing on it.

During my visit, in late August, it was clear to see the results first hand. There was little or no wear on the newly turfed areas. Mark showed me a number of different sites that had all responded well.

He is keen to improve the appearance and performance of the grass areas even more by improving fertiliser usage and aeration regimes to help maintain the grass plant's health.

Mark is planning to continue the lawn renovation programme as and when he has the budget and opportunity to carry out the work.

Complementing the zoo's layout is the quality of extensive landscape plantings that the horticultural team maintain, both inside and outside the animal enclosures. Mark helps design many of the landscape features with the aim of improving the aesthetics and ambience of the grounds.

The team also work in a number of the enclosures, maintaining the habitat to provide an essential environment for the animals.

It can take up to five years to design, plan and landscape a brand new animal enclosure. The most recent one completed was for the cheetahs.

Using the appropriate materials, such as grasses, trees and other shrubs, to provide the best cover and habitat for the animals, is vitally important. But, that's not always easy as they have to survive both the ravages of the English climate and any damage the incumbents might cause.

Another new attraction has been the Butterfly Journey. Mark and his staff designed, sourced and planted the whole scheme.

I was impressed with Mark's passion and commitment. His knowledge of plants and attention to detail is clearly seen in the way the zoo grounds are maintained and presented. The combination of good design, planting and effective maintenance promotes the zoo very well and helps to provide visitors with a day to remember.

Before I left, Mark took me to the elephant enclosure to show me the problem he is faced with - there was not a blade of grass left anywhere. It would appear that the sheer weight and nifty footwork of the elephants puts paid to any grass growth. Marks question to me was "have you any idea how we can maintain some grass cover?"

Now there's a challenge for Barenbrug and Lindum.