0 It's a long way from Tipperary

Established in 1909 as a nine hole course, Bandon Golf Club is set in the grounds of the Castle Bernard Estate, in the valley of the stunning Bandon River. It is built around a magnificent old ruined castle which dates back to 1604.

I arrived at Bandon Golf Club, in County Cork, in early January, one week after the snows had melted, on a lovely sunny Wednesday morning. But, not all was well in the camp, as 2,500 litres of diesel had been stolen the day before, and the garda were present, carrying out an investigation. It reminded me of the time when I had diesel stolen from the course where I used to work - the day after I had ordered a full tank delivery - so I was sympathetic to the situation that had befallen the club.

The lands on which the course is built is leased from the family of the late Fifth Earl of Bandon. A private 9-hole course, belonging to the Fourth Earl of Bandon, was in place since 1893.This was the ground that the Earl first made available to the club in 1909. In 1972, the Fifth (and last) Earl of Bandon, known locally as 'Paddy' Bandon, granted a lease to the club to facilitate its extension to eighteen holes.

The new eighteen hole course was officially opened in 1978. In 2001, the daughter of the Fifth Earl, the late Lady Jennifer Bernard, granted a lease on more land which

allowed the club to develop the beautifully landscaped 5th, 6th and 7th holes, with the ruins of Castle Bernard creating a stunning backdrop.

As mentioned before, the castle on the estate dates back to 1604 but, alas, in 1921, during the time of civil unrest in Ireland, it was burned to the ground. Despite being awarded £123,000 compensation, the castle was never rebuilt and it lies in ruins to this day.

The ten feet high dry stone walls, which act as a boundary to the course, were built during the 1600s and are starting to show their age. Two large sections adjoining the 9th hole collapsed on 25th November 2010 due to the snow and frost. They will be rebuilt in-house over the coming months. This will test the dry stone building skills of the staff.

Bandon is a busy members club, boasting one thousand two hundred members. Membership has remained steady during 2010 with competitions and green fees up on 2009. Each day of the week is taken up with some form of competition: Monday is the Senior ladies, Tuesday the Senior men, Wednesday is Ladies day, Thursday is the Fourball and Open Singles and Friday stages the Mixed Foursomes. With this hectic schedule, the daily course maintenance in summer consists of changing markers and flag positions, raking bunkers, emptying bins, blowing away debris on greens and hand mowing greens. 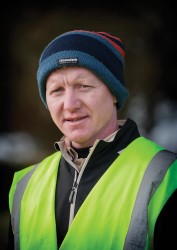 The course now occupies around one hundred and twenty acres, consisting of ten soil and eight sand based greens, along with three soil based practice greens. There are plans to convert the ten soil greens to sand, giving the club eighteen sand based greens.

The par of the course is 71, with some of the par four holes being rather short but tight, leaving very little room for mistakes. Many of the holes are bordered by evergreen trees; mainly pines, cypress and spruce. However, the newer holes (5th, 6th and 7th) play longer with larger greens and tees, and are mainly lined with broadleaved trees such as oak, beech, birch, hornbeam and sycamore.

James Burns has been the Course Superintendent at Bandon for five years, when he was appointed after the retirement of his predecessor, Jim Madden. You could say James is the 'returned exile' as, prior to his appointment in 2006, he was greenkeeper for thirteen years in Co. Tipperary Golf Club (Dundrum). But, James is a native of Bandon and he started his greenkeeping career at the club, as an eighteen year old back in 1989, where he worked for four years before moving to Dundrum in 1993.

He quickly settled into the role of 'top man' where his priority is to improve the overall standards of the course. James is very fortunate to have six quality staff working with him, the longest serving member being Mickey Lynch, who has been working on the course for thirty six years, an incredible record. James has great admiration for Mickey. "He is a quiet, hardworking man; he knows more about the club than most; his dedication is second to none; he shows leadership to the younger staff and has never been on sick leave. I learned a lot from Mickey when I started my career back in 1989."

Bandon Golf Club is health and safety conscious. It sent its course staff on a Greenpass safety programme last year where all participants were successful. "This course was a great asset to each member of staff and to the golf club. It showed us the dangers and hazards within the workplace and opened our eyes," said James. "At first, some of the lads were quite apprehensive about taking part, as they had been away from school and attending courses for a long time, but it was not long before they found it enjoyable and worthwhile," he concluded.

The current economic downturn has taken its toll, with staff numbers and working hours being reduced, along with a smaller maintenance budget. But, life goes on and one has to make do as far as possible with the resources that are made available.

The course, in general, faces north and experiences colder conditions, which means that it takes longer to warm up in spring. At this time of year the greens can be a week or two behind in growing terms.

Greens and tees are hollow tined each spring and autumn, but the greens are multi-tined approximately eight times in between. Around ten applications of sand topdressing is applied to the greens.

The greens fertiliser programme includes a granular feed in March, May, July and September, with liquid feed given in between when needed. Approximately three applications of a plant growth regulator are carried out each year.

Fairways are mown between 12mm and 14mm and are given a granular feed twice a year. One application of a plant growth regulator is given. Each yearm approximately six hundred tonnes of sand are applied to the fairways in April but, this year, it will be reduced as the budget for sand has been cut.

Rough areas do not get any feeding and are mown at 80mm (3 inches). When the fairways are being sanded, the heavy worn traffic areas in the rough are also given an application of sand.

Each year, the lower branches of the trees are pruned. This makes it easier for maintenance around the trees and it also allows golfers to easily find stray golf balls which, in turn, speeds up play. The broadleaved trees cause a serious leaf problem from September to November each year, as they have to be regularly blown away.

It takes up a lot of man hours. Last autumn/winter the greens staff were still blowing leaves off the course as late as January, as they had remained buried under the snow which fell during November and December and were, therefore, unable to be blown away until after the thaw.

During 2010, the club President organised a 'Sponsor a Tree' programme, offering members the opportunity to buy their own specimen tree to be planted out on the course. Approximately ninety members subscribed to the successful scheme where different tree species were sourced and purchased locally. The cost of trees purchased ranged from 50 euros to 100 euros, and included golden ash, silver birch, redwood, copper beech, various maples, purple flowering plum, whitebeam and weeping willow. 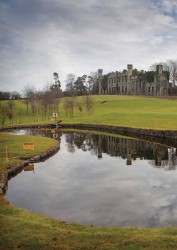 The land that the club occupies is, generally, free draining and the course dries out quickly after heavy rain. However, springs are a problem locally and plans are in place to have these areas drained.

Every morning, James and his staff arrive to the sight of rabbit holes in all of the fifty-five bunkers around the course. Sometimes the rabbits even scrape out holes on some of the tees and banks. Repairing the damage is time consuming, but James has no intention of killing any of the rabbits, as he takes the view that they are part of the wildlife and should be left roam the course.

However, during the construction of the 5th, 6th and 7th greens in 2006, there was a lot of damage done to the grass which had to be repaired each day using turf sod. The rabbits persisted and dug into the edges of the newly laid turf.

Now, you hear many remedies for stopping rabbits from digging on grass, from the bizarre to the ridiculous. A member of the club at the time suggested placing human hair around the repaired turf as a deterrent. James tried this and, to his amazement, the rabbits have never dug on the greens ever since!

James and his staff feel privileged to be working in such beautiful surroundings and they are held in high esteem by the golf club. Here's to the next one hundred years.

Alan Mahon is Editor of Greenside Magazine, a specialist publication for Irish greenkeepers