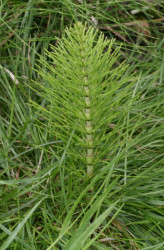 I am often asked to advise on the control of the weed, Mare's-tail, causing problems in cultivated land. Mare's-tail is an aquatic weed, Hippuris vulgaris, which is commonly found in ponds or slow flowing streams.

The problem usually turns out to be a similar shaped weed known as Horsetail Equisetum spp., a group of about thirty species that are found all over the world (except Australasia and the Antarctic) in a variety of situations from marshland (Marsh Horsetail Equisetum palustre) to cultivated dry land (Field Horsetail Equisetum arvense). The Latin name Equisetum is derived from equus, meaning horse and seta which translates as bristle or hair.

Why is there such confusion with these two different plants? It may well be that Horsetail, a non-flowering plant related to the fern family, does not usually appear in wild flower books whereas Mare's Tail does produce flowers and is often featured. You need to consult more specialised books to identify the Horsetail family.

Throughout the history of Man's civilisation on this planet the Horsetail has provided a useful resource. Uniquely, the stems of Horsetails contain significant quantities of silica granules and silica based compounds that give the plant mildly abrasive qualities which were utilised by early settlements for cleaning pots and polishing wood. Medical records dating back to ancient Roman, Greek and Chinese civilisations show that Horsetail has been used as a herbal medicine with multiple uses: It was used to treat open wounds; stemming blood flow and promoting healing, treatment of ulcers, haemorrhage, cystitis, dysentery, chilblains, conjunctivitis, deep-seated lung damage caused by tuberculosis, infections of the urinary tract, problems with kidney and bladder stones and bone disorders such as osteoporosis. (Please see disclaimer below) 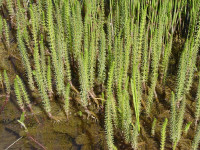 I have very mixed feelings towards the Horsetails. On the one hand they are a fascinating, unusual, medicinally useful and most successful group of plants that have been around for some 30 million years. The Horsetails are descendants of a group of ancient tree-like plants that thrived 300 million years ago during the Carboniferous period of pre-history. We know from fossil evidence that some of these ancestors reached over thirty metres in height. But on the other hand I have Field Horsetail in my garden and it comes up every year. The evil black creeping rhizomes penetrate deep into my clay soil and where they surface they give rise to green 'bottlebrush' stems in the late spring and summer. I have tried and failed to eradicate it by cultural means; when you pull up one of these stems you are rewarded a few weeks later by two more where once there was one! When you dig the ground where they lay, the black rhizomes break up and this helps to propagate more stems. A three centimetre length of rhizome has been shown to give rise to a whole new plant.

Horsetail rhizomes have been found several metres below the soil surface. They thrive in poor soils but have no great preference for soil type. The Horsetail family produce two types of stem; the first is a short (20 to 50cm), usually brown coloured 'Asparagus-like' stem that emerges early in the year and bears a cone structure at the tip containing large numbers of spores. These spores function very effectively to spread the weed to any remaining parts of your property that weren't previously blessed with it. The second type of stem is taller (up to 60cm with Field Horsetail), dark green in colour, sterile and emerges when the first have died back. It is little wonder that this plant has survived for so long. 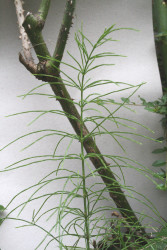 Over the years I have tried many chemical treatments to control my Horsetail problem. The best of which was a product sold by May & Baker to professional Groundsmen under the name of 'Bushwacker'. The active ingredient tebuthiuron was a very long persisting residual herbicide that slowly moved down the soil profile eradicating all vegetation; grasses, annuals, perennials, scrub, brush and even mature trees. It was withdrawn after a short period on the market because people were reluctant to use it for fear of killing nearby trees.

Short term control is seen where dichlobenil has been used (e.g. 'Osorno') - this herbicide lays down a chemical barrier to germinating weeds and emerging shoots. Care needs to be taken when using dichlobenil near herbaceous plants and shallow rooted shrubs (the latter are listed on the product label). Some success has also been reported with Glyphosate ('Round-up') but the problem with using any herbicide spray against Horsetail is that the 'Bottlebrush' stems are practically impervious to chemical uptake by virtue of the waxy nature and small 'leaf' area. I have read that desperate gardeners have tried crushing the stems before spraying or using gels, stickers and pastes to keep the chemical in place long enough to get a result. The sad realisation is that when a rhizome can penetrate up to 8 feet below the surface - you are going to need some form of miracle to get enough chemical uptake for a sound kill! My own attempts to eradicate Horsetail from my garden have only achieved short-term success. I now take the philosophical view that if evolution can't change the Horsetail in 30 million years, I must learn to live with it. 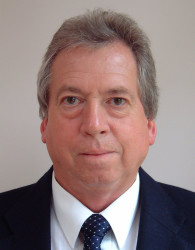 Disclaimer:
Please note that the author is not qualified to recommend the use of any plants or parts thereof for treatment of medical conditions or disorders.

I have 36 years experience in the Agrochemical Industry with 29 of those in Amenity. A brief summary of my career. After a science based education majoring in Microbiology, Parasitology and Biochemistry, I joined May & Baker, a leading Agrochemicals manufacturer, in an R&D role at their Research Station at Ongar, developing new active ingredients for agrochemicals. I became involved in the Amenity side of their business at a time when we were about to lose the Mercury based fungicides and was involved with development of the replacements; iprodione (now 'Chipco Green') and thiophanate methyl ('Mildothane Turf').

In 1981 I moved into the commercial side of the business as Technical Manager to the Environmental Products Division where I was involved with Distributors and end users alike. In the early '90's I left May & Baker (by then it was Rhone Poulenc) and moved across into Distribution selling the complete range of Amenity fertilisers, dressings, seed & sports equipment as well as chemicals. I have been with my present company Sherriff Amenity since 1999.
I have a keen interest in moving & stills photography and the study of the flora of Britain.