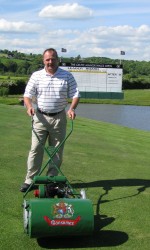 During my visit to the Celtic Manor Resort workshops, when helping the team to sharpen and set-up the Toro mower fleet for The Wales Open Golf Tournament, I was able to complete the assembly and sharpening of a restored 1950s Ransomes Auto Certes Mk1 greens mower (the 2 stroke engine drives the cylinder only). This mower is owned by, and has been totally restored for, my friend Noel Broderick, CEO of Broderick's Grass Machinery, the Textron dealer based in Dublin and Belfast. It is to be displayed in their showroom.

When seeing me sharpening this quite rare mower, Jim McKenzie, Director of Golf at Celtic Manor, began telling me that, as a seventeen year old trainee at Haggs Castle Golf Club, in Glasgow, he was trained to use one of these mowers as his daily greens cutting machine, and that, during the early 1980s fuel crisis, he also used the original 16 inch hand push model Certes without an engine. 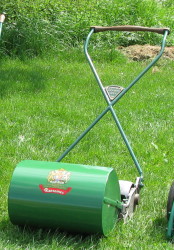 The 16 inch hand Certes was extremely hard to push when newly set, and Jim remembered an old time greenkeeper, Rab Robson, showing the younger lads how to place a match on the ground then, when the mower was pushed over it, this relieved the set and made the mower easier to push.

Jim was keen to have his photograph taken with the old Auto Certes mower, and so we took it up to the 18th green on the 2010 Ryder Cup Course. I really get a kick out of re-uniting people with their memories of using old machines.

I have, over the years, amassed and restored a large collection of old golf course machinery, mainly because it was being discarded to be scrapped.

Now, having recently been elected Chairman of The Old Lawnmower Club, I have a new task - to encourage the professional turfcare industry to preserve these old professional machines, and I encourage you to join us at www.oldlawnmowerclub.co.uk