It was Duncan McGilvray who introduced me to Roger Shaw, telling me of the unique role he has at Ramside Hall Hotel and Golf Club where he has helped design, construct and maintain the course since its conception in 1993.

He moved to Ramside in September 1993 to start the planning of a 27 hole course and a 16 bay driving range with practice chipping and putting green.
Working directly for the owner, Michael Adamson, he was given the responsibility of overseeing the entire project. The first task was for them both to visit numerous other golfing projects and select their own team of people and companies they knew they could work with.

Jonathan Gaunt was appointed as the course architect and, after several months agreeing planning permission, the construction of the course began in March 1994.

The project management team was headed by Ian Martin and his associate, Bob Hornegold who, along with agronomic adviser to the R&A, David Stansfield of PSD Agronomy, formed an experienced team.

Construction started on the 14th March and was completed in just over six months, with the last seed sown on the 19th September 1994.

When it opened in April 1995, Ramside Hall was the largest golf development in the North-East of England. The course was designed, with big undulating greens and numerous strategically placed lakes set in historic parkland surrounding a 100-bed hotel.

The architectural brief was for "a course of quality to please golfers of all abilities". That's the essence of good architecture, but here Jonathan Gaunt had created a gem, with a card of 6,809 yards, 6,100 yards of the yellow and 5,530 yards for the ladies, all par-72.

The course has many highlights, among them a collection of outstanding par-3s, two dominated by water, and one a double dog-leg with a stream in the green approach. This all enhances a site of exceptional beauty, a mixture of mature woodland, ancient parkland and rolling countryside.

Roger has a staff of ten to help maintain the course and hotel grounds. Head Greenkeeper is Harry Lees and his deputy is Craig Hardy. The greenkeeping staff are Lee Mason, Anthony Baker, Andrew Shaw, Mal Atwill and Mick Dobson. Nick Scott is the club's mechanic and Bob Stewart is Head Gardener.

Harry and Craig have been with Roger since the early days of construction in 1994 and helped with the growing in of the course. They have a wealth of experience and know the course inside out. They are a "well-balanced and dedicated team" who have learned many new skills under his leadership.

All service and repairs are carried out in house. All machines are fully serviced during the winter months with the aim of keeping downtime to a minimum during the height of the playing season. Nick, with assistance from Craig, does a sterling job keeping the equipment in first class condition, some of it has been in use since 1994, still looking good and giving good service.

Mowers are set up on a daily basis, with the cylinders checked for sharpness and set to the correct height of cut. A new grinder from Bernhard & Co. was purchased in 2006 to speed up the whole process. It has proved a very worthwhile investment.

Another invaluable piece of kit is the Rotary turf lift which, in Roger's words "is a great tool and helps with easy access to all areas of the machine and at any height. We have found it a great help in the workshop". 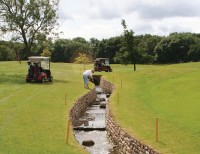 Presentation of the course is paramount and keeping the machinery in tip top condition certainly helps to achieve this aim.

Staff begin work at 7.00am and finish at 4.30pm with weekend cover provided on a rota basis.

The construction of a new water feature on the 2nd and 4th holes, with stonewalls to the existing ditch and new stone bridges, have improved the aesthetics of the course. The base of the ditch was concreted with river stones set in to form weirs. A new pump was installed in the lake to recycle the water back through a 90mm pipe to the headwall where it starts its journey again. A local stonemason was employed and Roger states that "he has done a fantastic job".

Work has begun on clearing the land that will be used for the extension to the course. A further fourteen holes will be constructed on 100 acres of farmland which has not been maintained for thirty years. Fifty of the acres have already been cleaned, ploughed and cultivated and the same process will soon begin on the remaining fifty.

Nine existing holes (19-27) will be redesigned down to four holes allowing space for future hotel development. A new underpass is also planned that will link the old and new courses for access by both players and machinery.

Greens are mown with a combination of triple and pedestrian mowers depending on the time of the year. Cutting with pedestrian mowers is preferred during the spring and autumn period, especially after any aeration work, as this helps to restore the surface.

Greens are cut at 3.5mm in the summer and 5mm at all other times. Tees and approaches are kept at between 6-8mm, fairways at 12mm and semi-rough between 35-50mm.

Greens are fed with a cocktail of products using a combination of granular and liquid formulations.

Tees and approaches:
• Gem Procote. One application in each of the seasons

As much aeration is done as possible when soil conditions are suitable. The greens are hit hard in early spring and then again at the end of the competition season early October.

The first pass is with the Imants 2.1 metre Shockwave at 250mm depth to decompact the rootzone. This is followed by hollow core aeration with 10mm tines to keep thatch under control.

The final aeration pass is with the Terra Spike with 12mm tines set at 250mm. The greens are then lightly firmed to restore the surface using the hand mowers.

During the growing season the greens are kept open using pencil 8mm solid tines aerating to 125mm depth on a monthly basis. They are deep scarified with the Allett in the spring and autumn and verticut with thatch removal blades every other week during the season.

Greens are scarified and sarrel rolled to key new bent grass seed into the surface of the greens.

Straight sand dressings to greens and tees helps to keep the surface open. Leighton Buzzard 30 grade sand is used with a light application through the Dakota after each of the aeration treatments. This is vibro/brushed into the surface with Turfworks units on a Greenking 4.

The fairways are scarified in spring and autumn with the Trilo SG700.

They are aerated twice a year, once in the autumn with the 2.2 metre HD Imants at 275mm depth and once in the spring with the 2.5 metre vertidrain with 25mm tines set at 250mm depth.

The club has a fully automated Toro Watering system, controlled by a Toro SC3000 controller, that was installed during the construction of the course in 1994. The system uses water from the course's own lake for greens, tees and approaches. The club are currently upgrading parts of the system to accommodate new pumps and pipe work to increase the flows and performance.

Also, a new submersible pump has been fitted to operate the new water features on the 2nd and 4th holes. All of the work was completed by Enviropro H2O.

This winter Roger's staff, who all hold chainsaw certificates, will continue with their tree-thinning programme, with approximately thirteen hectares of woodland plantation to thin out leaving the better quality trees to mature. All branches are chipped on site and stored for future use around the course.

Bunker work will be ongoing with the replacement of some drainage and the upgrade of the blinding material between drainage stone and bunker sand. Some bunkers, now classed as 'out of play', will be filled in and new ones added and brought more into modern play areas.

After last year's wet weather, and the problems it caused with some parts of the course flooding, a programme of installing new surface water drains will also be undertaken this winter.

The work will be done with whizzwheel type sand bands. After trialing other equipment Roger feels this is the best way to enable them to link into the existing drainage stone at 250mm and lateral drains laid at 10-15 metre centres.

Having walked the course, and seeing first hand the dedication and passion Roger and his staff have, it is easy to understand why it is in such excellent condition. For a course barely sixteen years old it seems to have matured beyond its years. Roger is clearly still on his 'mission'.