by Dr Mark Hampton MIEEM
in Consultancy
on 18 May 2011

Signal crayfish were climbing out of the pond at night to graze on the grass of the adjacent fairway!

Crayfish, often described as freshwater lobsters, are one of the most amazing animals that we find in our lakes, ponds, streams and rivers.

There are over 600 species found around the world, and more than half of these live in North America. Interestingly, there are no crayfish that naturally occur on mainland Africa.

Crayfish are generally nocturnal and tend to hide under rocks, in crevices and tree roots during the day, coming out a night to feed on plants, small animals, carrion; in fact, crayfish will eat pretty much anything.

The only native UK species is the white-clawed crayfish, which is a relatively small animal (maximum length of 12cm), compared to its American counterpart (the signal crayfish, which can grow up to 30cm). It was once widespread across the UK, but is now suffering severe decline, such that it may be completely eradicated from the UK.

Many native crayfish, around the world, are under threat and in decline. This has, historically, been caused by pollution and habitat loss but, over the last century a new threat has emerged: the introduction of non-native or alien crayfish, and this is now the key cause of the decline of native species.

Alien crayfish have caused problems in many countries, impacting, not just on the native species, but on wildlife in general, and also on physical structures, such as flood banks, that can be expensive to remedy. 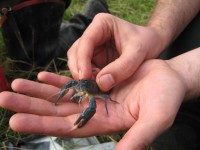 When alien crayfish are highly invasive, it becomes almost impossible to stop them; they reproduce rapidly and spread through rivers and canal networks.
They can, and will, get out of a pond and walk short distances over land to get into a nearby stream.

I recall visiting a golf club in Yorkshire where the American signal crayfish had been introduced to a small ornamental pond. They had been put in the pond to control excessive weed growth, but were so prolific that the pond became completely devoid of plants and all other life; in fact the crayfish were climbing out of the pond at night to graze on the grass of the adjacent fairway! Needless to say they are now well established in that river catchment.

Once in a river system, the crayfish will spread on their own but, in many cases, the spread around a river catchment and from one catchment to another is 'helped' by human activities.

Apart from being introduced as 'weed control agents', anglers will sometimes use them as bait, and crayfish can be moved around with consignments of fish used for stocking new waterbodies. On top of this, crayfish are sold for the aquarist trade. But the primary reason for crayfish being spread around on a global scale, and often being introduced deliberately into ponds and rivers, is as a food source.

People eat crayfish and, in some countries and cultures, they are an extremely popular food source. The red swamp crayfish, Procambarus clarkii, is probably the most widespread of all crayfish. Originating from south eastern and southern USA, it is now found in other parts of the USA, and has been introduced to, over thirty countries in Europe, Africa and Asia. 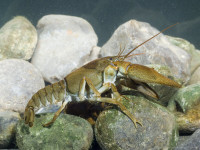 North American crayfish often carry a disease, a fungal type organism, most commonly referred to as crayfish plague. Under normal circumstances, the American species are only carriers, or vectors, and will not succumb to it, but it is fatal to species from Europe and Australasia. It has been directly responsible for the loss of many local crayfish populations and has caused the catastrophic decline of white clawed crayfish here in the UK. There is no way to stop the plague, if carriers are present.

Many species have been moved around the globe, and this has been happening ever since mankind began sailing the oceans. Initially, food crops were collected and taken home for planting - think of the potato, brought to Europe from South America in the early 16th Century.

Signal crayfish were first brought over to Europe in the mid 19th Century and are probably in over twenty-five European countries. The first plague outbreak in Europe is believed to have been in Italy in 1859.

Not all alien species become invasive, and it is worth looking at crayfish to highlight some of the characteristics which enable them to flourish and, often, outcompete the native species.

Both American signal crayfish and red swamp crayfish, two of the most widespread species, have common characteristics that have enabled them to be very successful in getting established and, then, effectively spreading and taking over. In the first instance both are widely eaten, and this alone gives an incentive to introduce them to new areas. In addition they:
• are highly fecund (produce many eggs)
• are vectors of a pathogen known as crayfish plague
• will survive out of water or in dry watercourses/ponds
• are often more tolerant of pollution
• are more aggressive
• dig their own burrows

The problems with invasive alien species are widely known. Japanese knotweed in Britain, rabbits and cane toads in Australia, zebra mussels in North America to name a few.

Crayfish are another species which are highly problematic, difficult to control and costly in terms of their impacts. Unfortunately, it is only in relatively recent years that we are really waking up to the problems of global species transfer and, if we were to attempt to put things right, even if it were possible, it would be phenomenally expensive.

It has been suggested that the cost of controlling crayfish has never been estimated; although a recent paper estimated that over £2 million was spent each year addressing the issues associated with signal crayfish, and over £500,000 in Scotland, a country without any native crayfish.

The loss of white clawed crayfish populations in England and Wales has been so dramatic that it may well be irreversible. However, there are conservation projects now being set up to try and reverse the trend. A major recent initiative is the 'Ark Site programme', which aims to identify isolated self-contained sites that can support a healthy, self-sustaining population of white-clawed crayfish.

Although there are several existing Ark sites and more planned, there is an urgent need for many more to be established to safeguard the long-term survival of white-clawed crayfish across England and Wales.

Setting up Ark sites can be straightforward and inexpensive, and can provide a sustainable future for the white-clawed crayfish in the UK. If you have a potential Ark site on your land, feel free to contact the author for more information.