0 It's all downhill from here

IT'S ALL DOWNHILL FROM NOW 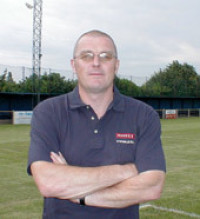 Here we go again! Hasn't the close season gone oh so quickly? It only seems like yesterday that the nets were coming down as opposed to going up!

The season proper, began for me on Saturday 16th August at 2.45. It has been a very difficult and frustrating last few weeks to say the least.

Pre season friendlies began on Tuesday 15th July. A further six games were to follow. A mixture of Tividale FC, Dudley Town FC, Tividale Youth Team and a local Sunday side all used the pitch at various times. One consolation was that the Villa All Stars played on the pitch last Sunday afternoon. It gave me an 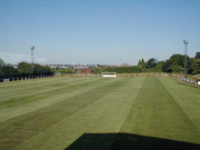 The picture (right) shows the day before our first friendly. And I thought that the pitch was dry then!

There were four games played in the driest conditions that I have seen for years. This has been detrimental to the surface of the pitch, as play has ripped out grass at its interface with the soil. 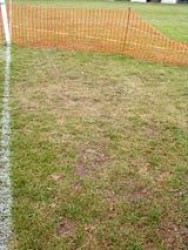 The pitch now looks like it did when the grass established after renovation works had been carried out. Seed lines are again very apparent.

I had been using my Wessex rotary finishing mower to cut the pitch up until recently. I raised the height of cut to approximately 60mm just to help protect the grass from heat stress and players feet. I explained to the players that raising the height of cut would indeed protect their feet from hard ground conditions. That's my story and I'm sticking to it!

Thursday 14th August saw me in discussion with various parties regarding training on the pitch. It is sometimes so difficult to try to 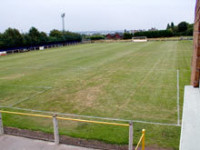 On Friday 15th August I laid down string lines to mow in the presentation bands. I cut the pitch with my Dennis mower, the height of cut set at 50mm. I felt that this height would have to suffice with (still) no rain forecast for the immediate future. With only two mowing bands left to cut, I had a phone call that forced me to cease work and pack things away. I wasn't too fussed as I had planned an oil change the next day. I figured that the two bands that were left to cut would warm up the oil in the mower sufficiently to help the drainage of the old oil.

I arrived at 9 o'clock the next morning, the morning of the match. I started the mower and left it to tick over whilst I moved over the strings. When I returned, the mower was silent. I tried and tried to restart it but without success. I looked at the basics and found nothing untoward. I had little option but to call Clive McIntosh my very reliable mechanic. On the phone he guided me through the basic diagnostics and it was considered that fuel starvation was more than likely the problem. A sticking jet probably being the culprit. There was nothing that could be done at that moment in time as Clive was busy elsewhere. I decided to finish cutting the pitch with the Wessex.

Aesthetically the pitch didn't look good at all. Most of the pitch had bands that didn't stand out too great and the rest looked worse. The tyres from the compact tractor just flattened the grass. It was evident where the drainage system lay, with an obvious brown coloured herringbone pattern all over the pitch!! This dry spell has no doubt affected other Clubs who have similar problems with inadequate irrigation systems. The grass just seemed to lie on the surface and wouldn't stand up at all. Footprints showing where I have walked are the norm. The drought conditions have led to cells within the plant becoming flaccid.

At 10.30, I, with the help of the Chairman, Don Aston, along with Malcolm Taylor, began taking down barrier fencing that prevented people getting access to the pitch during the close season. This was the time that I have been dreading! We had left this until the very last minute so the downside to this was that tyre tracks made the pitch look even worse. I tried the best that I could to travel in the same direction as how the mowing bands had been mown out. This job took us nearly two hours to complete. 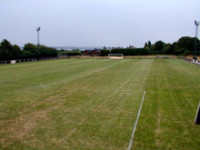 The pitch less than two hours to kick off.

I returned to the Club at 6.30 in the evening for a few pints of the Black Stuff. They do a cracking pint of Guinness and blackcurrant at Tividale FC! There was some happy banter in the Club. Wolves had lost 5-1 to our friend Steve Patrick's team, Blackburn Rovers and West Bromwich had just beaten Burnley 4-1. These results carry plenty of local banter as you would imagine.

As soon as the final whistle blew some of the kids went out onto the pitch. Admittedly the immediate goal areas were fenced off but it is so frustrating from my point of view that children are allowed access to the pitch at all. I have recently submitted a letter to the Committee stating that the kids need somewhere to play. Part of the letter suggested getting funding to construct such an area. If anyone reading this can be of help with this then please contact me at chris.charles1@orange.net or call me on 07977 247623. I even explained that by having such an area constructed could lead to more families using our facilities, thereby bringing in more revenue. Picture (right) shows pitch after final whistle. Fence and sprinkler in place! 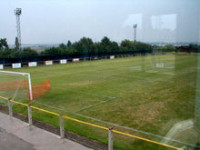 This morning ( Sunday 17th ), I arrived at the Club at 9.15. My task today was to turn on the sprinkler and concentrate it in the goal areas. The pitch looked a little greener today for some reason. Thankfully the temperature has dropped in recent days which should help a little. Whilst the sprinkler was doing its job I set about mine.

I donned coveralls, gloves and wellies and set about spraying various areas such as car parking areas, pitch surrounds etc. I used Roundup Pro Biactive at recommended rates. With all relevant paperwork now complete I can later go back to the Club for a well earned pint. No doubt there will be kids on the pitch. I just have to grin and bear it!

I have 10 bags of 12:6:6 in the shed crying out to be put on the pitch to help green things up and get things going again! I also have 5 litres of selective herbicide waiting to get its teeth into the broad leaved weeds. All that is needed now is the right conditions to apply both. I will be there, chomping at the bit as soon as such conditions arrive.

Because the ground has been so dry and hard it has been nigh on impossible to aerate the ground with my Sisis Outfield Slitter. I have applied weight to the slitter with the use of concrete posts. However, it has still struggled to penetrate the ground. Root development is not good at all.

Hopefully, this dry spell will come to an end soon. We at lower level football need Mother Nature all the more now for a drop or two of the wet stuff. If these drier summers become the norm in the future, then I think that we are going to have major problems.

Although the pictures that accompany this report show the pitch looking unsightly and unkempt, they are there for all to see what weather conditions can still do to a pitch that is maintained to a reasonable standard with a Committee that have invested in machinery and equipment wisely.

Good luck to you all for the new season. If anyone is in the vicinity of Tividale FC here in the Black Country, then please feel free to drop into the Club for a drink. I would love to meet new faces.

As the title to this report states. IT'S ALL DOWNHILL FROM NOW.