Our journey began at the headquarters of Stuart Canvas in Warrington where all manner of covers are made, whether to protect Premier and lower league football pitches from frost, the immaculate lawns of Wimbledon from rain, or even Manchester United's players as they run out to the pitch.

But where did the idea of a hover cover come from? Ed Stoddart, Chief Executive at Stuart Canvas, gives a little insight. "The hover cover took us more than four years of research and development to get the design and manufacture right. The current model operates in a similar way to a hovercraft as it uses engines to blow air under the covers, is constructed using specialised lightweight materials and is very manoeuvrable."

The first cover was "hovered out" over ten years ago at Lord's, in 1998, and immediately brought improvements by reducing the amount of playing time lost to rain. It enabled the groundstaff to cover the pitch and square in less than five minutes, whilst the unique airflow system helped dry the pitch as well as reducing the manpower needed to manoeuvre the cover in place.

Today, five of the leading test grounds, including Lord's, Edgbaston, Trent Bridge, Glamorgan and Old Trafford, are all using the hover cover, but what makes them so special and what is their potential reach in cricket?

"The groundsmen we work with love the double benefit of the air flow system that is integral to the cover, as it makes their life easier when wanting to cover an area, as the hover action is much quicker and easier to manoeuvre" said Ed.

"The air flow system means that the covers literally hover over the ground and do not leave wheel marks when moved around. In addition, its manoeuvrability means that it could also be moved sideways and lengthways easily, on and off the pitch, to assist work during showery days."

Bringing these covers to market is no easy task. Despite the research and development involved, the delivery of a ground cover that can range from between 80 and 100 feet long and 15 feet wide, poses both logistical and assembly challenges.

The aluminium parts are delivered by lorry and are assembled by a team of five professional hover cover builders on site. Using a mixture of 'clunk click' fixing as well as welding, the cover is assembled in around three days, and addition time is then spent testing the equipment and briefing the ground staff team before it is ready for use. 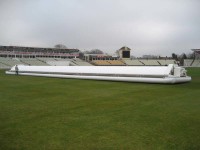 The assembled hover cover is powered by two 20hp petrol-driven engines that allow it to be self propelled, so that the ground staff can guide the cover over the pitch, bringing protection within five minutes of the start of rain.

Ed, continues, "The critical element is that the cover needs to be both easy to use and effective in its job, as no one wants to be faffing around in the rain with big heavy covers as the pitch gets wet."

An added design element of integrating gutters down each long side allows additional square covers to be carried on inflatable tubes on to the pitch.
These covers can be easily rolled out to protect the square and, if necessary, covers can also be provided for the bowlers' run-up.

Today, the hover covers are bringing a new dimension to the game as an additional avenue for sponsorship. The canvas top has proved popular for sign writing, as in Sure for Men's recent sponsorship but, along with this, the covers can be shaped to the sponsors wishes, for example to look like a drinks can or the tail fin of an aircraft.

But, can we expect to see hover covers across the county grounds and further afield, or will they remain exclusive to the most prestigious and affluent test grounds? Ed smiled; "This is a flag ship product and we are immensely proud to have them in five of the most prestigious test grounds in the world.
Yes, of course, I would like to see hover covers in all professional cricket clubs, but appreciate that groundsmen need to manage budgets and, in some cases, do the best they can with what's available, hence why we also offer many other ground covering products."

Undoubtedly, hover covers deliver both protection from the weather but also additional benefits in pitch preparation and maintenance. With nearly a third of county grounds now using them it seems that they are now an integral part of a groundsman's arsenal. For those groundsmen who don't have one yet, maybe it's time to have a word with the marketing department to see if sponsorship can cover some of the costs!