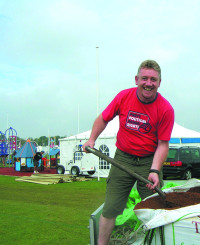 Sport is one of the most widespread features of modern society; its influence can be observed at an individual, local, national and international level. Sport can transcend the boundaries of territory, languages, race, wealth, social standing and disability; it can command physical, emotional and financial commitment from participants and spectators alike.

Sport is employed by many different bodies, such as non-government organisations, politicians and governments to pursue issues such as healthy living, education, urban regeneration and economic development. The finale of the Olympic Games 2012 bidding process is a good illustration of the immense political interest in staging a major global sporting event.

As the race to stage the 2012 Olympics reached its final stages in Singapore, five cities remained in the bidding process, Moscow, New York, Madrid, London and Paris. The final decision rested with the 104 member of the International Olympic Committee; Paris was thought to be the favourite with the London bid close behind.

The relationship between politics and sport became clearly evident when the UK Prime Minister, Tony Blair and the French president, Jacques Chirac flew to Singapore to add weight to their respective causes. To the surprise of many, the decision went to London, prompting scenes of adulation and disappointment and a deluge of speeches on the important social, economic and environmental benefits to be gained through staging a major global sporting event

Ken Livingstone, the Mayor of London, who was in Singapore for the IOC decision, suggested that bringing the Olympic games to London would have a positive impact on deprived areas and would also tackle poverty, adding that the games would be staged in the poorest part of Britain.

Whilst the poverty in the East End of London might not be the same as the poverty in many developing countries, the idea that sport can be utilised to break 'the cycle of poverty' has gained support in recent years. When listening to the rhetoric of politicians, sport is very often described as a powerful mechanism that can have a positive effect on the negative aspects of society.

The presumption that sport can contribute to community regeneration and can improve social, economic, environmental and human development suggests that sport imparts positive outcomes through participating.

The primary driver of sport is participation, without participation the implied physical, psychological, social and economic benefits could not be realised. Those who do not participate in sport can also be affected by the possible outcomes. For example, in Amsterdam the local authority encourages the use of bicycles, which has seen a subsequent increase in there use, resulting in reduced traffic congestion and improved air quality, which has benefited the community as a whole.

Sport offers a wide range of participation options, such as individual or team games, which can be performed on a variety of surfaces and in different environments, there are sports which require a high degree of skill and others which require physical strength. In addition, sport can be competitive or purely recreational. Participation in sport or physical activity is seen to provide personal benefits, including improved physical and mental health and secondary wider social benefits such as reduced vandalism, crime and increased social cohesion. There are also examples of the potential of sport being utilised to combat many of the world most difficult problems, for instance, reconnecting war torn societies or combating the ravages of AIDS in Africa.

Kicking AIDS Out! (KAO) is an international network of organisations in sub-Saharan Africa which uses sport, physical activity and play to raise awareness about HIV/AIDS. The network has produced teaching materials for those who use sport and games as a method to inform about HIV and AIDS.

Such is the potential of sport, it is being used to rebuild civic society after war. Projects such as 'Open Fun Football Schools' which uses sport as a tool to promote tolerance and peaceful coexistence, originating from the aftermath of war in Bosnia and Herzegovina and Macedonia. The project was initiated to stimulate the process of encouraging minorities to return to their homes; priority was given to cities that were open to the return of minority groups.

Anders Levinsen, the founder of 'Open Fun Football Schools' explains, "From the very beginning we realised that our 'Open Fun Football Schools' programme was an excellent instrument to open the doors of cities that were blocked after the war. Thus, in the summer of 1999 we succeeded in organising a multiethnic trainer seminar in the Serb town of Pale for 135 persons including 50 Muslim trainers (it was the first multiethnic event in that town after the war)".

Through his experience with 'Open Fun Football Schools' Levinsen believes that the sports sector has a tremendous unexplored and under utilised potential with regard to social cohesion and the rebuilding of a democratic civic society.

Theoretically sport can make a positive contribution to society; however, it can also have negative repercussions, such as, violent behaviour, exploitation, corruption, discrimination, hooliganism, drug abuse and cheating.

Sport is symptomatic of many of the features of modern society, many of the inequalities found in wider society can also be found in sport. Sport has the potential to produce both positive and negative outcomes, for the individual taking part and the wider community. The assumption that sport produces positive outcomes needs to be questioned; outcomes can be positive, negative, varied and unpredictable.