by Peter Hollingsworth
in Consultancy
on 06 Feb 2006 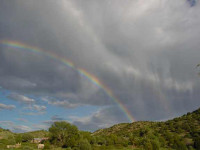 There have been a few stories on the news, on the web and in the press about the lack of rainfall over the last winter, particularly in the south east of the UK. Most of us see this as a water company issue and do not expect the impact to come round and hit us in our day to day lives. The reality is that if there is not a significant amount of steady rainfall in the coming few weeks, then we will start to hear more about the problem and there will be impacts as a direct result.

There are huge amounts of statistics showing rainfall figures for the UK, but statistics are just figures, they don't show us what the effects are going to be. Hose pipe bans are already being talked about and indeed have already been implemented in certain parts of the south east, but more worrying are the long term implications of what might happen if the rain doesn't come. A lot of the time we don't consider what a lack of water resource would mean for us here in the UK because "it always rains here, doesn't it". Our entire country is dependant on water, we need it for everything from cooling our power stations that give us heat and light, for farming to bring us food, for washing and cleaning, for irrigating our sporting venues be they football fields, golf courses, rugby pitches, but more importantly we need it for sustaining life itself.

As I write this, I am also looking at the forecast charts for the next 10 days, there is some rainfall on its way, but is it going to be enough? Personally I don't think so. Short periods of heavy rain will help a bit, but not as much as would be the case if it rained slowly and steadily over all of the winter months. Heavy rain results in most of the water resource simply washing off the hills, into the rivers and out to sea. While we are constantly made aware of global warming and climate change, we mostly think of this as being a hot or cold issue, but the biggest actual impact is on the amount of rainfall that we need.

To find out more about the water resource situation go to the Environment Agency Web site see following link: WATER .There is a host of information about water, it's uses and how we can actively be involved in saving this valuable resource.