Whilst football groundstaff were compelled to battle against almost unprecedented levels of ice and snow last November and December to keep the fixture list intact, those tending cricket squares over the winter might have been glad of a closed season rest.

In the case of staff at Old Trafford, all daily duties drew to a close following completion of major works to turn the famous square through ninety degrees and create six brand new wickets.

It's not every day that a cricket square - and one as renowned as this Manchester turf - comes in for such a wholesale reworking. Pitchcare caught up with Head Groundsman, Matthew Merchant, last September, just after the last home match of the season, to report on the strategy behind the project - deemed necessary to remedy a thorny issue that had arisen because the afternoon sun constantly hampered batsmen's vision, particularly late in the season, when top-of-the-table tussles were climaxing, and trophies were at stake.

As part of a wider multi-million pound transformation at Lancashire County Cricket Club, that has seen significant commitment in new stadia seating, a major retail store and iconic conference centre, turning the square was seen as timely action to address a problem that had been talked about and planned for some time. The work was completed in late October, under local contractors Bancroft Amenity, who handed back the reins to Matt and his team for them to move forward with.
Whilst winter presents an intensively active season for many sports clubs, for Matt and his team, the cold weather and "typically wet" Manchester microclimate meant follow-up work would have to be put on hold until late January, even early February, when more clement weather allowed them to take stock of what the winter had left them.

Much to Matt's surprise, it was the rain that had caused the only real problems for his team when they returned to commence work full-time on the six new wickets and the existing five that had been turned.

"We were amazed that, despite all the snow and ice, there was little damage on the square," he reports, "and were expecting to find at least some snow mould, but it seems that it was so cold that the fungus didn't have chance to thrive." The heavy, prolonged rain that had hit the north-west in late October, through November was the culprit for the only damage inflicted on the new strips. "Once the final stages of the work were completed in October, and the seed was sown, we witnessed a sustained period of rain which washed away much of the seed," he explains.

"As we were in no position to do anything over the winter, we only realised the scale of the bald area in late January, so we took to work immediately and began hand forking the affected patches to get the seed back in and allow it to establish as soon as we could. The hand forking continued on the old five wickets as a way of aerating and starting things again without being too intense." 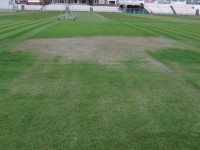 The effects of the prolonged rainfall have meant that work has started slower than Matt would have liked. Cutting has only recently resumed, he says, and he stresses that he's keen to prevent any damage by "overdoing it" or starting to cut too severely so early on.

"Conditions are ideal to use the Paladin now," Matt says, having begun using the mower in early March. "Over the next few weeks, we'll start rolling with the Allett as the ground firms up a bit but, for the time being, our primary focus will be on getting rid of the baldness on the five old wickets, which, after more than a month, is starting to show some positive signs of regrowth.

Since the end of January, Matt had left the groundsheets down permanently, so that further rainfall would pose him no added problems and would allow him to focus on getting back up to speed.

Like most professional grounds teams, when factors conspire against you and the weather takes a turn for the worst, modern technology can often be on hand to lift some of the burden.

The scale of the bald problem at Old Trafford was such that Matt resorted to bringing in lighting rigs to help speed the recovery process on the threadbare strips. Yet, due to the legal proceedings that the club went through at the end of summer 2010, following the controversial deal signed with Tesco, budgets "had to be cut back across the board", which included some of the planned turfcare investment.

"It had been in the pipeline for a while to get a new SLG lighting rig, something we would make real use of with the volume of rain we get up here and knowing that we would have sixteen wickets to look after for the new season," explains Matt.

"The club's financial problems were such that it just couldn't go ahead, as the rigs are usually a highly expensive investment, so we had to rethink our strategy."

Knowing that artificial lighting was vital to the success of bringing the new wickets up to standard and encouraging growth back on the affected areas of the old wickets, Matt decided to investigate the idea of constructing a rig himself.

"In late October, Bancrofts dug up two old wickets from the square and reinstated the area with outfield spec, using Barenbrug SOS mix on the existing run-ups.
"The heavy rain, frost and snow that followed, and failure of the seed on the run-ups, meant that we had to get some growth by overseeding with a different seed mix - this time the DLF iSeed that had proven successful on the square," Matt recalls. While he knew that artificial lighting was necessary for maximum and efficient growth on the area, it was only by chance that he fell upon the answer to his query, found while on a groundsman's meeting in Derby.

"I contacted Mark Rolph at Century Lighting and they were able to provide us with the lighting we needed to make up a rig of our own. One of the club's electricians, James Anderson, helped construct the design and we now have a perfectly functional rig at a fraction of the cost of what we would have spent - It's not pretty but, so far, we're seeing great results.

Since the rigs have been used, Matt has seen a resurgence of growth on the bald area, in part thanks to the move over to another seed mix. "The other mix just wasn't right for us, but we knew the success we'd had with DLF iSeed. We'll continue its use for the coming season across most of the outfields and wickets, and we'll soon be overseeding."

The rigs are likely to remain down until the start of the season and the first match at Old Trafford on 24th April. Whilst the work has now been completed on the construction of the new wickets, Matt will have to wait until 2012 before they see any action. Lancashire will be making use of their outgrounds at Liverpool, Southport and Blackpool for all but one of their championship matches, beginning on 8th April at Liverpool. Old Trafford will host one championship match, and two internationals, welcoming India and Sri Lanka, yet the new wickets will see none of that action.

"Remedying the baldness has been our primary concern, but it's now well on its way to being ready for the first game of the new season," Matt says. "We'll start rolling the pitch two weeks before, by which time the ground should have firmed up."

"We've also had to do a little work on the topdressing on the old newly turned wickets, as Bancroft's didn't have a chance to back fill as much as they would have liked, with the poor weather setting in earlier than we'd hoped."

Far from taking a three-month holiday, Matt and his team have been kept busy preparing the club's three outground pitches for the arrival of Lancashire for the new season.

Blackpool and Southport will only see one match each, with Liverpool hosting the bulk of the action, which has meant Matt's attentions have been focused there. "Liverpool only had one wicket that was suitable for county cricket, so we spent the majority of our time working on the other six to bring them up to an appropriate standard," he explains.

"The wickets had very hard saddles, so we had to sort this out first, koroing off to reduce the levels suitable for play. All the wickets and the squares across the three sites have been topdressed and overseeded using iSeed."

"Until the opening game, the team continued to bring the levels down and, most importantly, keep it as dry as possible."
Hosting all the one-day fixtures and a championship match at the end of the season. plus two one-day internationals will keep Matt on his toes with only five wickets to play on, each one being played on possibly up to four times.

"The programme for the coming season will differ very little from what we've always done, so it will largely be business as usual," he reveals. "Our main goal will be on getting the levels right on the eleven new wickets to bring all sixteen up to the same standard, whilst keeping a close eye on the affected bald areas. It'll be a matter of rolling and more rolling over the next year, with our target for unveiling the new additions set for June or July 2012, when the normal cricket schedule will resume and we'll relinquish the work we're currently doing at the outgrounds."

"Bearing in mind the terrible weather and the challenging financial circumstances - both of which had the potential to really hinder progress - the work has been an overall success, thanks to a little good fortune and improvisation on our part to make sure the square received everything it needed."