Christmas has come and gone, but winter still remains, or at least it should have if I've written this article in time for the February issue of 4scapes; if you're reading this in April, think of this article as more of a review article instead. Anyway, winter, what can I write about winter? How about something that doesn't occur too often south of Scotch Corner these days, due in part to the fickleness of global warming (note my first buzz word, my boss has asked me to include at least five buzz words, so that this article appears to be up to date, contemporary, modern and of the time), so what could it be? Why, snow of course!! Suffice to say, things that aren't too good to turf can happen beneath a blanket of snow, such as disease and die back. 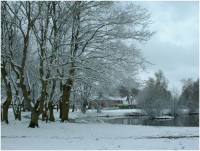 In a previous article for a sports turf magazine I referred to Donald Rumsfeld's theory of unknown knowns. This article on the other hand is a known known, as I know it is not an exhaustive, complete or full account of the vagaries that can befall your lawn or large grassed area when snow is present. This is mainly because what becomes an issue for one lawn is not necessarily a problem on another, highlighting the differences between ornamental lawns, coarse functional amenity lawns, and sports turf surfaces. Alternatively, another interpretation of my known known is that it's a subtle disclaimer for holes in my knowledge, or a blatant excuse for not researching the subject properly.

Pros and Cons
What are the pros and cons of snow? It depends. I know, this is the sort of wishy-washy answer that a polished "consultant" gives you; a subtle blend of vague titbit knowledge and overt smugness, all rolled into one, as they know you can't disagree with their answer; an answer that annoyingly is right. Because "it depends," for instance, on the seasonality of the sport; is the sport played all year round, is it a summer sport, or is it a winter sport?

A heavy snowfall of the type experienced in a large part of the UK (a good inch or two that lasts for 24 to 48 hours) isn't too bad on a surface that experiences all year round use, such as a schools playing fields or a golf course, as it (in theory) closes the course to play, therefore reducing some of the wear and tear inflicted on it through play. Or at least it should, there's always someone who wants to play, regardless of the conditions. Summer sports obviously aren't played on in the depths of winter, so minimising wear and tear isn't an issue.

Snowfall can cause problems, however, on all year round and summer only surfaces if it interferes with any renovation work that has either just begun or recently completed, or if it delays work scheduled for later in the season. Snow on a winter sports surface can be more detrimental, unless of course your facility is a ski slope, where snow is considered quite useful. From an economical perspective, snowfall on a winter sports surface can result in a closed facility, which means cancelled fixtures, and in turn, a loss of vital revenue. Then there is the potential for outbreaks of disease, such as Pink Snow Mould (Microdochium nivale) which can be devastating to the turf, as it is already in a weakened state during the winter months.

Overseas, where predictable snowfall for prolonged periods can occur, appropriate steps are taken to prepare the turfgrass for the conditions it is expected to experience. These steps include the use of covers, and applying various lotions and potions (fungicides) like some sort of pseudo inoculation, something that is often referred to as a "preventative spray" by many in the UK.

This gives me the opportunity to get on my soap box and have a little rant. In the UK there is absolutely no need for a preventative spray if you are maintaining a healthy sward by carrying out the correct cultural practices. It's like taking an aspirin to avoid a headache you might never get. It's a complete waste of valuable resources (time, labour, money) and isn't particularly environmentally friendly.

Many would argue that it's being proactive rather than reactive, and I know the adage that prevention is better than cure is quite correct, but there are degrees of prevention, you don't put your arm in plaster to avoid breaking it. Overseas however, where snow can be deeper than a few inches, and last for more than a day, there may be some merit in the practice, if it is permitted within the environmental regulations of that country.

Teenagers and Toboggans
Another problem with snow is kids, not children, but the adolescent version, the teenager. Early in my working life I was a greenkeeper on one golf course some years ago (last century). It experienced above average snowfall (four inches) so the course was closed, and yes, people still wanted to play golf. The course had quite a few hills and slopes, and some members asked for permission for their children to use their toboggans on the course. "Sure, if they stay away from the greens" was the Head Greenkeepers reply, so off went a group of teenagers with their toboggans.

With hindsight the flags should have been brought in, but they were left out on the course so that everyone knew where the greens were, and therefore the areas to be avoided. The members kids went to the steepest slope on the course, which was adjacent to a green, and were left to their own devices. The following day you could see that the snow was fairly compacted in that area, but nothing untoward had happened; or so we thought.

A few days later the snow started to melt away and expose fag butts and empty cans of beer strewn over the area at the top of the hill (where the green was), and an altogether unexpected mosaic pattern began to emerge on the exposed turf too. It wasn't black bruised turf in the shape of footprints, as the snow was deep enough to prevent that happening. What could it be we wondered?

Then we realised, the teenagers had decided to do some writing, along with some drawing, in the snow with the flagstick, which bruised the turf. As the snow melted away further, the full scale of their artistic endeavours was revealed. Imprinted on the turf, like branding on a cows backside, were rather large phallic images with accompanying short descriptive terms. It was January, and there was zero growth occurring, which meant the images were going to stay for a while, but fortunately we were able to mask their appearance with some dye. Doubtless the parents of the offending children wished they could mask their appearance as easily, as they were rather embarrassed by the uproar it caused at the club.

Thawing Out
Speaking of thawing snow, this can be when most problems occur. All of a sudden you have an excess of surface water that creates wet soft ground, as well as people wanting to use the facility because "the snows gone, so it must be alright to play on". If your drainage system is poor to non-existent, you will have to endure the effects of surface water for longer, with possibly extended closure of the facility, or a surface in play that cuts-up easily and leaves indentations with every footprint, leading to compacted uneven surfaces going into the spring which require renovating; just when the grass starts to grow like mad.

Are there any benefits to having snow cover on your facility? In a word, no (ski resorts excepted). Advantages are small in comparison to the disadvantages. Snow forced closures help rest the surfaces from play or general use, and if you suffer from animals breaking-in and digging up your turf, you can see from their footprints where they have been entering your site, enabling you to focus your animal deterrent practices. And the other advantages of snow are that it rests the surface from play, oh and it rests the surface.

There are not many advantages. However it does give you some time for machinery maintenance, painting and long discussions on the merits of sustainable carbon-neutral microbial enhanced biodegradable cost-effective ozone friendly quality assured best practice performance quality standards (that's the buzzword count nailed), or any other subject that takes your fancy.