0 Jabber from the hut 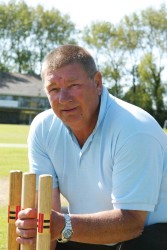 It speaks volumes about a community that a groundsman's hut is an integral part of it, but that is Guernsey cricket.

In the summer months, the visitors we get at our small shack at the King George V Playing Fields (known by the natives as the KGV), near the island's west coast, are numerous and regular.

The lure of an afternoon's cricket, combined with an ever-burning barbeque and well-stocked fridge, seems to keep bringing people back and, when we stage the big matches, we are often overrun.

It is also an intriguing fact of this small-knit community that, on our full-time groundstaff of two, we boast a current international cricket captain in the number.

My assistant, Stuart Le Prevost, is Guernsey skipper and has, in the last six months or so, overseen two highly successful World Cricket League divisional campaigns, including wins over the likes of Malaysia, Norway, Nigeria and Japan.

He, and a part-time staff member John Mountford, work with me to provide wickets for cricketers of virtually every age and ability in Guernsey - from Business House teams in friendlies up to Stuart's own island side in International Cricket Council sanctioned tournaments.

We basically cater for all and sundry, both on and off the pitch.

My experience before taking on the role in the island was nothing out of the ordinary. I was heavily involved in Boughton Cricket Club in Northamptonshire whom I captained for about 12 years.

It was a typical club cricket in the UK where, as captain, you would make the teas in the morning, go to cut and roll the wicket before going out to toss up and, if you were batting first, you would go out and umpire as well! That was what cricket was where we played.

I did about six years part-time doing the club ground. 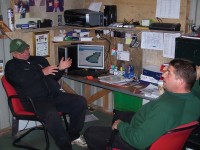 ne of the regrets I have is that I just had to pick up and learn about groundsmanship as I went along. It would have been great to work with somebody over a period of time who was a professional - basically like an apprenticeship - but I did not have that luxury.

It was through Jason Shambrook, someone I used to play against in Northants and who I got to know, that I came to Guernsey.
Jason, who is now cricket development manager on the island, came here to do some coaching and was also asked to help the then part-time groundsman, John Cockayne, with the square at the KGV.

Jason and I had been on courses together and, when the Guernsey Cricket Association started talking about bringing someone over in a groundsman role, he suggested me. Dave Nussbaumer, the then GCA chairman, got in contact and that is, basically, how I came to be here.

Initially, it was on a part-time basis and I used to travel backwards and forwards, but it has evolved into a full-time role because that is what was needed - what you do in the winter is just as important as what you do in the spring and summer. 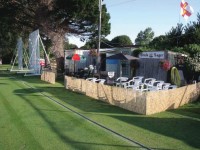 The set-up in Guernsey is quite unique compared to any other groundsman's job I know.

We have got our weekend cricket as well as some tour games during the week, but we have also got our night games every evening. That is very restrictive on your work.

Every night you have possibly got someone traipsing all over your square while they play on the artificial pitch, and yet we play between 60 and 70 fixtures on grass at the KGV during the summer.

At county grounds, every night they can put covers on their square - from March onwards they control every drop of water that goes on it.

We cannot do that here. We have a problem with watering, in that we have to do it in the early hours of the morning so that it is ready for evening games to be played, this limits the amount of water we can put on the square at any one time.

There have been some fun and games with those evening matches, when we ask the players to place the covers after they have finished. They are not always Guernsey's elite cricketers, so to speak. Very often they will be lower division guys who simply want to enjoy a social game in the evening - and they have done some silly things with the covers, such as covering the artificial pitch overnight rather than the cut grass one!

While it makes it difficult, though, it does not make it impossible. You have to work with what you've got. Yes, it can be frustrating, but the majority of the players in the island play just domestic cricket, only a few represent the island, and you have got to respect that because they pay their money just like anybody else. 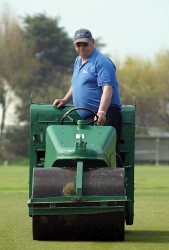 To start with, the job at the KGV was just about good management and that's all there was to it, although I did inherit a fault which was a root break on the square, and it is not easy to address that.

To be fair, when the square was laid here in the 1990s, it was not professionally done. That is not a criticism, because it was the people involved in Guernsey cricket who did it voluntarily at the time. They knew it was the way forward and they took steps to put it in place.

After I had been here a couple of years, they laid a new square at Port Soif, which is the ground of Rovers - the only club who have their own ground in the island.

We, as groundsmen for the Guernsey Cricket Board, look after both those grounds - KGV and Port Soif - and assist and advise on the square at the College Field, the ground of Elizabeth College.

They may be a little more than a mile apart, if that, but the KGV and Port Soif are extremely different.

Although both are picturesque grounds, the KGV is tree-lined, and long considered the home of Guernsey cricket, whereas Rovers' headquarters have developed, from a solitary football pitch with a small corrugated iron hut that served as a dressing room, to one of the island's premier sporting facilities.

Port Soif is on the coast and a wide-open playing field. It is made up of different soils under the square, which was professionally laid.

There is a tremendous wind-factor there. The wind will burn the grass and it will dry it out abnormally quickly.

ne of the problems is that, if you get a drying wind and sunshine, it will dry the top inch out quickly but, underneath that, it will still be quite damp and that can lead to slower wickets.

Like Port Soif, the KGV square has eleven pitches on it, but it does have different qualities. Currently at KGV we use Surrey loam, and only the club one at the moment, but we are thinking of going up to a county standard, one with a bit more clay in it, in an effort to get a bit more pace and bounce. Port Soif is constructed with Boughton Loam which gives the wickets different characteristics although they are so close geographically.

At the start of every new season, I have looked at what we have done previously and thought "we have got to raise the bar again with our standard of work and what we are looking to achieve".

The way the GCB is going, and the forward-thinking of the board, is what is keeping me in the job and my enthusiasm for it.

Since Guernsey has joined the ICC, as well as giving the island the chance to host international tournaments, it gives us more funding to make the improvements we need and want. 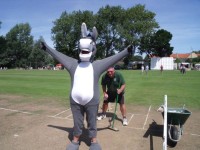 In terms of equipment, we are much better off now than we were, but we are nowhere near what ideally we could do with. We are never going to be Lord's, but we can make the most of what facilities we have got.

Because we are a smaller place than many others, there is a lack of specialist machinery that you can get here - it has got to come from the mainland, and you have got to plan well in advance so that you have got it here when you need it.

On the other side of the coin, though, is that, because the island is small and some machinery you only need once or twice a year, certain equipment can be shared by various venues, associations and workplaces. Ideally, I would like to see an unofficial groundsmen's association here in Guernsey so that happened more frequently.

On the subject of sharing, the GCB has also developed links with Sussex CCC and I take quite a bit of advice from the Sussex groundsmen. In future, I will be visiting there to see how they work and their methods. Also, having been a member at Northants CCC for many years, I have struck up a relationship with the groundstaff there who are always keen to listen and advise.

Next year the bar has been raised again for us because we are to produce a wicket for a second XI county game and, after that in 2011, we will be looking to produce one for a full-blown first class county one-day match.

Following the two senior international tournaments we held here - the European Division Two Championship in 2007 and World Cricket League Division Seven in May - we came out really well, and it is not just the wickets, but the bigger picture of the whole organisation of such events and the multitude of aspects that go into them.

The GCB are now investigating the possibility of laying a third square at another venue in the island and that would enable us to host bigger tournaments. It shows how far we have come.

When I first came, the KGV was full of potential - it just needed a little TLC and expertise. The biggest difference that has been made since is that they have put a full-time groundsman here.

Being an ICC member has enabled the GCB, with the funds, slowly but surely to get better equipment and more people employed.

I have also been involved in the Indoor Cricket Guernsey project, designing and constructing a purpose-built centre, which is the envy of many across the UK.

It just emphasises the enthusiasm for cricket in the community and how it continues to grow as the world becomes a smaller place.