Mölle Golfklubb sits on the peninsula that forms Sweden's westernmost point. Located inside the Kullabergs Nature Reserve, Mölle Golfklubb was established in 1943 following a meeting of its initial 25 members at The Grand Hotel in Helsingborg. The first course of 12 holes opened in 1945 when Prince Gustaf Adolf (later King Gustaf VI Adolf) drove out from his summer residence at Sofiero and hit the first ball. In 1959 it was enlarged to a full 18-holes. 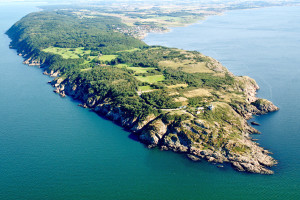 Peter Tublen has been the Club Manager for the past 9 years and has been in similar roles for the past 17 years, having begun his career at Perstorps Golfklubb. He has a team of four full-time staff and three seasonals. One of the full-time staff is Head Greenkeeper Fredrick Rosdahl, who joined the club in 2007 and succeeded his father to the top role in 2009.

"I grew up on a smallholding in the area and worked on the nature reserve as a ranger and guide," Rosdahl said. "In 2007 a vacancy became available at the club and I jumped at the opportunity. In 2008 I was appointed acting head greenkeeper on a trial basis, all the time being mentored by my father and then in 2009, on his retirement, I was promoted to head greenkeeper. Having a father working as a greenkeeper, I had a natural interest in the job. I undertook my basic greenkeeping training and was then successful in getting my higher qualifications quite rapidly."

Being situated in the middle of a nature reserve gives added pressure to the way the course is managed, which was part of the reasoning behind the purchase of the Jacobsen Eclipse 322 diesel-electric hybrid green mower.

"The Eclipse fits precisely with the environmental profile of the club and the local kommune of Höganäs, of which we are an integral part," Tauben added. "We are extremely mindful of our good fortune to have a golf course in this region. I'm certain that if we wanted to construct a new course here it would not be allowed today. The quality of the course is improving, especially the greens, and that is down to the great job that Frederick is doing with the new fleet of equipment we purchased from Ransomes Jacobsen's local dealer GVM of Malmo during the season."

Due to the regulations governing the management of the reserve, there are many restrictions on the greenkeeping team and how they maintain the course. In 2017 there will be a total ban on the use of chemicals, so they are currently phasing them out and replacing them with biological fungicides and pesticides. Snow mould damage is also a problem as the course comes out of winter.

"It's a real challenge, but one we relish", said Rosdahl. "The biological treatments haven't been too effective, but I've been applying Zeolite, a volcanic deposit, to help the snow mould issue and that seems to have worked well. I've divided the putting green into four areas and use it to experiment with various treatments and practices. You have to constantly try new things as the regulations change.

"The Eclipse has certainly helped us here; mainly due to its new technology where we change the number of cuts per metre and raise the height of cut, putting less stress on the grass, while maintaining green speed."

The club now has close to 950 members, of which 165 are juniors. They have between 8,000 and 12,000 green fee rounds per year and are fully booked from mid-summer to the end of August. Total rounds per year are between 22,000-23,000. They were the first club in Sweden to organise a Ladies European Tour event in 1984 and in 2008 Annika Sorenstam was made a honorary member in recognition of her winning her first professional competition there in 1996. Ice hockey star, Henrik Zetterberg is also a member.

Ransomes Jacobsen is a Textron Inc (NYSE:TXT) company. More information on the product offering can be found at www.ransomesjacobsen.com.