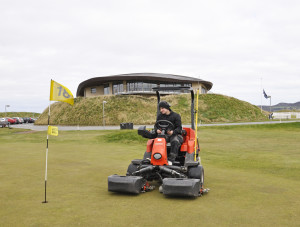 "Without a doubt, the main reason for purchasing this machine last year was its total lack of hydraulic fluid. An oil spill on a links green is hugely more damaging than on a parkland course, as any repair tends to leave a scar and it is very noticeable," he said.

"Since June, the machine has cut every day, apart from probably 10 days when we were closed for inclement weather, and we've learnt so much more about its capabilities. We have fescue greens and they don't respond well to low heights of cut. I've now raised the height of cut to 5mm or 6mm, depending on the season and grass growth, and the trueness across the greens is phenomenal.

"We purchased a Smithco roller a couple of years ago and rarely use it now for the purpose we bought it. The trueness and smoothness of the greens using the Eclipse is so good that we don't need to firm the greens as we did in the past. So we've actually changed the management of our greens as a result of buying the Eclipse.

"I believe that many greenkeepers are discouraged from buying an Eclipse because of its new technology; they are wary of the electronics. My answer would be embrace the technology; it's easy to use and the ability to speed up and slow down the reel speed to vary the number of cuts per metre is the biggest advance in greenkeeping for years. In fact, once you lock in the cuts per metre it maintains it, no matter what speed you're travelling. It really is the bee's knees!"

St Anne's Golf Club was formed in 1921 and began life as a nine hole course until 25 years ago when a further nine holes were added. In 2003 an extensive redevelopment of the course was completed and a new state-of-the-art clubhouse opened.