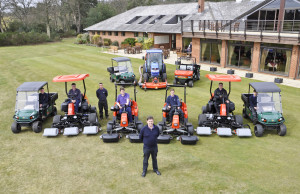 Gareth Roberts is the course manager and joined the greenkeeping team back in 1990 working alongside the legendary Ian McMillan, who did so much to restore the course and turn it back to the true heathland landscape it is today.

"The members are very proud of their course and are support everything the greenkeeping team do," he said. "That's why we have to make wise and informed choices when we purchase new equipment. Following the first outing with new Eclipse mowers, we had comments from the members on the improved quality on the greens, which was fantastic for all of us. The brush behind the front roller really stands the grass up, which I'm convinced enhances the quality of cut."

Gareth had a number of conversations with Chris Haspell, Course Manager at Castle Stuart before purchasing the superlight fairway mowers.

"He is a real advocate of the SLFs; he particularly likes their lighter weight, but also the way the smaller units follow the ground contours. We have very similar fairways and they do a tremendous job for us. We are mowing half and half presentation-wise and boxing off every time we mow," he added. 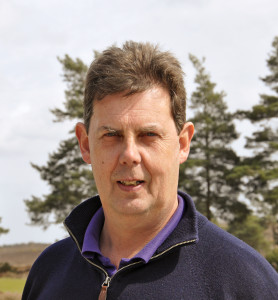 The heathland management at Hankley Common is an ongoing process and Gareth and his team are always looking at ways to continue the evolutionary process at the 700-member club. Heather regeneration is a prime activity with seed collected after flowering every October. They use an Iseki TH5470 tractor fitted with a Wiedenmann heather collection system. Much of the seed is used on the course, but a significant amount is sold to other heathland courses across the UK.

Gareth began his career in 1977, in his native Scotland, working at The Royal Aberdeen Golf Club, before moving on to Huntly Golf Club situated some 65 miles south of Inverness. In 1987 he took the decision to move south when the position of deputy head greenkeeper became vacant at North Middlesex Golf Club. He was promoted to head greenkeeper shortly afterwards.

At Hankley Common he manages a team of seven, including his two sons Graeme and Scott, although Graeme will be leaving shortly to take up the position of deputy head greenkeeper at Tandridge Golf Club near Oxted in Surrey.