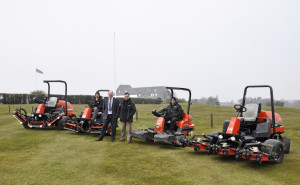 The equipment from the Jacobsen brand, delivered at the beginning of last season includes an AR522 rough mower, a TR3 tees and surrounds mower, and LF570 light fairway mower and an Eclipse 322 diesel-electric hybrid greens mower.

Robin Greaves is the head greenkeeper and has been at the club for the past seven years. He was previously at Thornbury Golf Centre near Bristol, part of the Burhill Group and prior to that worked at Bristol & Clifton Golf Club and also Cotswold Hills near Cheltenham. He has a team of four greenkeeping staff including two brothers, David and Stephen Patrick.

David Patrick contributed saying that he "liked the easy set up and quality of cut" from the Eclipse 322 while his brother Stephen commented that "the TR3 is very comfortable with a good view of the cutting units."

Ransomes Jacobsen is a Textron Inc (NYSE:TXT) company and more information on the product offering can be found at www.ransomesjacobsen.com