Two new additions to the mowing fleet at Mearns Castle Golf Academy are helping Head Greenkeeper, Jack Glen, and his team deal with their 'grass factory'. 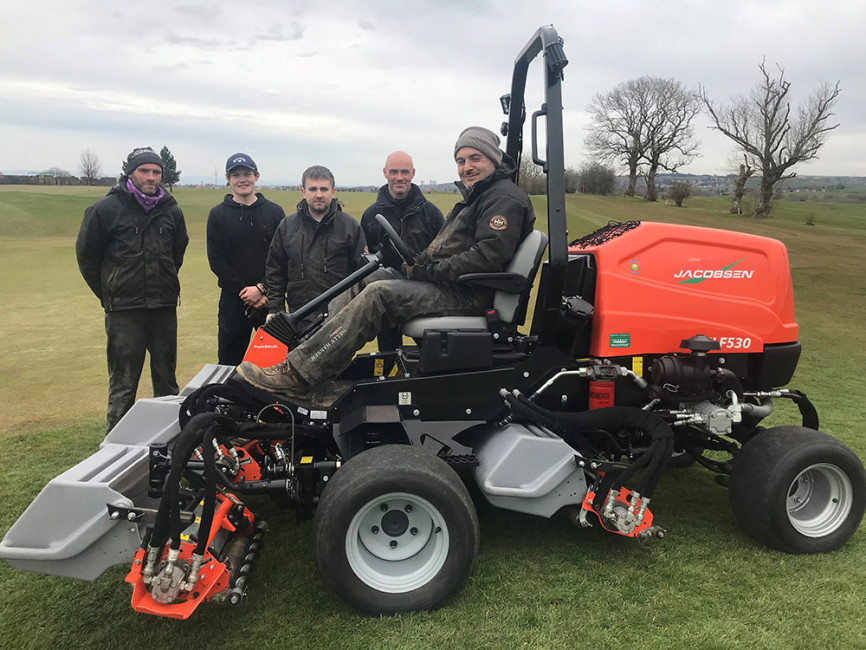 Jack (centre) began as a 17-year-old apprentice at the East Renfrewshire club and has worked his way through the ranks to head greenkeeper. He is joined by (l-r) Fraser Stewart, 1st assistant, Euan Mack, seasonal course and range assistant (2nd left), Russell Aird asst greenkeeper, (right) and Peter Lafferty, asst greenkeeper (on machine).

Mearns Castle Golf Academy has both a nine-hole golf course and 50 covered driving range bays in Glasgow's southside. The parkland course is both challenging and scenic, so attracts a strong membership and has very many visitors.

In their first delivery, Jack and his team received a super light Jacobsen SLF 530 ride on reels mower which made an immediate impact on the fairways.

"It gets all nine done in around 5 hours. It also never makes any mess because of its light footprint; so no tyre tracks or impressions, just always neat. We gave it a go on the tees and approaches using the grass boxes and it does those beautifully, too. I'm really pleased. It's doing more than we bargained and to a higher level of presentation," began Jack.

Next to arrive was a Jacobsen GP 400 ride on greens mower. Offering a precise cut, it has a swing our centre unit for easy maintenance and adjustment, and legendary Jake cutting units that are hugely regarded across the industry.

"I can't fault it. It's every bit as good as I'd hoped. It gives a super exact cut. Both machines are terrific, and I'm really pleased," said Jack.