0 Jane's Story - an appeal for help 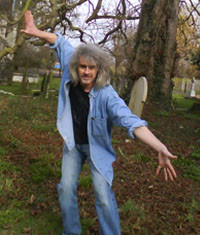 This appeal was started by Mick O'Hara, a groundsman at Ratcliffe College in Leicestershire.

Mick was doing some DIY jobs in a large, detached house when he met Jane. He was shocked by her appearance, how lost she seemed, how tiny, young and fragile. He tried to speak to her but she turned her head away. Mick was deeply affected by this brief encounter, even more so when her mother revealed that she was a heroin addict.

Jane's father left home when she was 16 and she went through a very bad time. Unfortunately, it was at this point that she was given free heroin one evening at her school gates and, as Jane puts it, "I started to take drugs to take away the pain".

This was not a good decision: to all intents and purposes she had chosen to throw her life away. A few years later, she is a six stone skeleton who has had an abortion and has almost died of an overdose on three separate occasions. Her future is bleak if she does not get help.

We tend to think of drug addicts as coming from vast, grey housing estates, where joblessness and hopelessness are rife, but this is not always the case. Jane is the product of an affluent, middle-class home. Her mother's heart is also broken.

We are all addicts of some kind (cigarettes, alcohol, food, chocolate, coffee, work ...) the list is endless.

Mick determined to do what he could to stop the tragic waste of a young life. He wrote a song about his encounter with Jane, raised some sponsorship, got together a group of musicians and recorded a track entitled 'Jane'.

"We are a group of ordinary people from the Midlands who are intent on making some serious money to help young drug addicts" says Mick. "Heroin kills because addiction leads the taker into a downwards spiral of deprivation, disease and the constant threat of an overdose."

"Okay, to take heroin the first couple of times is stupid, but who didn't do some stupid things when they were young? Of course, once someone is addicted it's a different matter - nothing matters but the next fix!" continues Mick.

"The first experience is always the best. The Who's Pete Townsend says that he took one fix and was immediately addicted. Then users spend the rest of their lives trying to achieve that first moment of bliss. Do you know what it's like to chase oblivion? Do you know what it is like to be hanging onto life by a thread? I hope not!"

How Can You Help?

You may have heard Mick's song or heard about it. You can listen to it on the home page - www.janesstory.com.

A copy of the track costs £2 but larger contributions are welcome. A donation entitles you to enter a prize draw for a guitar signed by Kasabian.