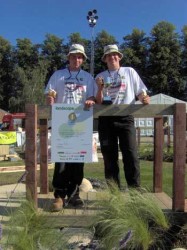 Horticulture students at Askham Bryan College are celebrating after winning a national title which could see them heading for the world contest in Japan in two years time.

Tim Lancaster, of Guiseley, Leeds and Keith Chapman of Bedale, North Yorkshire won the 2005 UK Landscape Skills Competition and now have the opportunity to try for the world title at the competition in 2007. Both are 19 and are students at the York based college where Keith is studying for a Higher National Diploma and Tim, a National Diploma.

Prof Gareth Rees, College Principal, said: "This is a fantastic achievement both for the students and for the College. To win a national award such as this takes hard work, skill, knowledge and the ability to keep a cool head under pressure. We are absolutely delighted and their success is richly deserved." 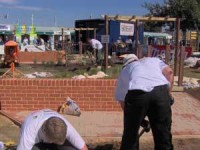 The Askham Bryan team were head to head with Writtle College, Essex and Reaseheath College, Cheshire and had to follow a brief to create a 7m x 7m landscaped garden over two and a half days. Harry Turner, the College's lecturer in Landscape Construction said: "It was a tough project as the competition is designed as a typical commercial brief.

The judges commented on how professional Tim and Keith were, and that their approach was methodical, structured but imaginative. There were a lot of elements to include in a small area, but they created a garden which not only achieved this, but was pleasant and uncluttered."

Mentoring support at the competition was given by fellow students Robert Brooks and Andy Lewis who were members of the team in the qualifying regional round earlier this year.

The design was provided by landscape designer Peter Killen of the British Association of Landscape Industries (BALI). The competitors had to interpret the design without previous sight of the plans and construct the garden showing their theoretical knowledge and practical skills.

The brief included creating a wooden bridge, a brick wall, a pergola, block paving path, and a feature dry river bed with boulders and slate developing into a still stream. The pair used sedum matting to create feature banking and used a range of grasses, Prunus, Berberis and Spiraea for planting. The training provided at the College by joiner Darren Thompson proved invaluable in the construction of the bridge and pergola.

The 39th WorldSkills Competition in Japan is a four day event held every two years for young people up to the age of 22 who battle it out to become world champions and take home a gold medal for their country. The demanding six and a half hour contest involves students taking a 6m landscaped area from ground level to a finished garden. Tim and Keith will compete against the 2006 UK Champions for the honour of representing the UK in Japan.

The UK Landscape Skills competition is supported by UK Skills, the British Association of Landscape Industries (BALI), The Association for Land Based Colleges (NAPAEO), LANTRA and Skills Challenge.

The College has a 26 hectare horticultural unit with a new glass house complex to provide facilities for plant production, tropical display and interior plants as well as student project work.

A further six hectares of sports fields, golfing facilities and bowling green are also used for teach turf management and groundsmanship. Landscape features such as a lake, woodlands, rock gardens arboretum as well as demonstration gardens, borders and meadows are also used.