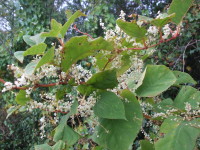 Japanese Knotweed is probably the most invasive plant in Britain and is scheduled under the 1981 Wildlife and Countryside Act so that it is an offence to plant or cause it to grow in the wild. In addition, under the Environment Protection Act (1990), Japanese Knotweed is classified as 'Controlled waste' and must be disposed of at a licensed landfill site in accordance with the Environment Protection Act (Duty of Care) Regulations 1991.

Fleshy, red shoots appear in the early spring from an extensive underground network of stems (rhizomes). The shoots can reach 1.5m by May and 3m by June.

Long racemes of cream flowers appear in late summer and dieback occurs at the first frost of the autumn, leaving the leafless stems to remain throughout the winter.

The rhizomes from one plant can be 2m deep and 7m across. In the UK, the plant does not produce viable seed, except in the rare instances of hybridisation with other similar introduced species.

Spread is via fragments of roots and stem, (often referred to as propagules), which are transported from the original parent plant either naturally, along rivers and watercourses, or with human assistance, as plant material or as fragments in soil.

Pieces of rhizome as small at 1cm can produce new plants and the cut green stems also readily regenerate. Japanese Knotweed can colonise most habitats and is able to grow through walls, tarmac and concrete, but it has become infamous mainly due to spread along watercourses. 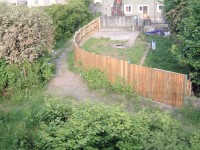 Digging and removal of infested soil is an expensive option, but one which may be chosen on development sites where building delays are unacceptable. Treatment on site can reduce the costs of dumping off-site. There are recommendations for some herbicides containing triclopyr and picloram, but glyphosate based herbicides, like Roundup ProBio or Roundup ProBiactive 450, are often chosen for sensitive sites, near water or where replanting is required.

Always clear the previous year's dead stems during the winter. This evens up the new stems and makes spraying easier.

As with most broad-leaved perennials, optimum control with glyphosate will be achieved from treatment when flowering in August or September, but before die-back.

Treatment from flowering onwards is the most effective, because the glyphosate is transported deep down into the underground rhizome structure, along the natural flow of plant nutrients for winter storage. Japanese Knotweed is sensitive to frost, so late season applications should be made in advance of the first frosts.

In the spring, treatment is usually less effective because the plant is naturally pushing nutrients strongly upwards to the developing canes. This can lead to a good initial top kill of leaves but less transport to the rhizomes. Regrowth after early season treatment can often be 'epinastic', i.e. stunted and distorted and, because it is not actively growing, it is more difficult to kill.

Treated plants take up to six weeks to show symptoms. Only remove plant material when there is no further sprouting. Only re-spray if there are no visible signs of dieback after six weeks.

For established stands, it is important to plan an effective management programme over several years as repeat applications may well be necessary, either to control very large plants, with their associated underground mass of rhizomes, or to control those plants which were missed by earlier applications due to shading. Sites should be monitored at least every three years.

Chemical control in aquatic areas needs Environment Agency approval. You will need to fill in form AqHerb0 1 and submit it to your local EA office.

1) Foliar spray at flowering (August-September)
This is the optimum timing. Apply 1800g/ha (e.g. 5l/ha Roundup ProBio in 200 litres water through a knapsack sprayer. Use of specialist extending hand lances is recommended where plants are 2-3m tall. Spray the underside as well as the upper surface of the leaves. CDA and ULV applicators may also be used at appropriate volumes.

2) Two foliar sprays at 1 metre stem height
Spray the plants at 1-1.5m tall, in late May, rate as method 1 above, repeat on any re-growth later in the season once they reach 1.5m again. This technique can be used where stands are particularly thick, as part of an integrated control programme or where long lances are not available, but will not give as good long term control as a spray at flowering. Re-growth can be stunted and unresponsive to glyphosate for a further season.

3) Weedwiper technique
Applications using a hand held weed wiper have proved successful. Use Roundup ProBiactive 450 at a 1:3 ratio with water and Roundup ProBio at a 1:2 ratio with water. This method can be useful where treatment of nearby vegetation is to be avoided or for spot treatment of small re-growth. It has very high success rates, but it is labour intensive. 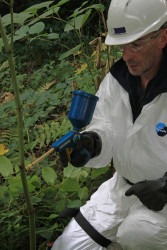 4) Stem filling technique
In certain situations, such as when Japanese Knotweed is growing on sites with a ground flora considered of particular value or local importance, e.g. a Cornish hedge, or in a garden situation where it is growing close to other plants, a stem filling technique may prove a suitable alternative. Although requiring a far higher labour input, the herbicide can be more accurately directed. This technique involves cutting the stem and introducing 8ml of a 20% solution for Roundup ProBiactive 450 and 10ml of a 20% solution for Roundup Pro Bio directly through the top. It has been developed by the National Trust, in conjunction with the Cornwall Japanese Knotweed Forum.

5) Stem injection technique
Use of a stem injection gun can be especially useful for treating small stands, new invasions and to tidy up escapes from eradication control programmes. It is particularly useful where plants are growing intimately with desirable plants or near water.

The tools use a needle to inject the pesticide directly into the stem. Several versions are now available including the Micron Injectordos, as well as the original JK1000 Injection System, which originated in the USA.

For more information visit the website: www.monsanto-ag.co.uk or e-mail technical.helpline.uk@monsanto.com

Full details of the Stem Injection method are available from Monsanto or visit www.micron.co.uk/injectordos

Lantra accredited training courses on the Stem Injection Treatment of Japanese Knotweed are available from www.groundsmantraining.co.uk/course/stem-injection-training/

Roundup is a registered trademark of Monsanto Technology LLC.
All other products mentioned are the trademarks of other manufacturers.
Roundup ProBiactive 450 and Roundup ProBio contain glyphosate.
Use pesticides safely and always read the label and production information before use.

Cornwall Council is a major partner of the Cornwall Knotweed Forum and is committed to preventing the spread of Japanese Knotweed. Where it is found on land within the Council's control they take appropriate action to minimise the risk of spread and, where appropriate, endeavour to eradicate it in line with current good practice and the priorities set out by the Forum.

The Council commissioned CABI Europe to undertake a research project on behalf of national stakeholders. The project began in 2003, since when the project partners have committed over half a million pounds to researching and developing options for the natural control of Japanese Knotweed. It aims to establish whether natural control is a feasible method for the long-term, sustainable management of Japanese Knotweed and its hybrids in the UK.

Cornwall Council is responsible for the co-ordination of the project which is entering the final stages of research and has identified two potential options, the Aphalara psyllid and a Leafspot fungus for the natural control of Japanese knotweed. Consent for experimental releases of the psyllid, Aphalara itadori was granted by Fera and Welsh Government in 2010. One of these release sites is in Cornwall. Monitoring is continuing.

James Macfarlane is the Vegetation Officer for Cornwall County Council and has been closely involved with the efforts to eradicate Japanese Knotweed in the county. "Glyphosate is effective in most cases, but is best used in the late season. Many people try to treat Japanese Knotweed too early when translocation is poor, which can lead to dwarf growth or dormancy and the plant can return."

"We monitor sites for five years after all visible growth has gone, to ensure that we can respond to the inherent dormancy of Japanese Knotweed."

Mr MacFarlane suggests that the herbicide picloram can be useful in the early season, but, unlike glyphosate, cannot be used near water. "If we have to tackle Japanese Knotweed near to choice vegetation, stem injection is a useful method, or you can shield favourable plants with polythene," he adds.

The Japanese Knotweed control workload in Cornwall includes 2000 highway sites, where material has often been dumped on verges. "Physical removal and sorting can be effective and, on some sites, deep encapsulation may be an alternative," Mr MacFarlane comments.

This involves excavating soil to a depth of at least 3m and within 7m of the perimeter of the knotweed. Site managers should check the periphery of the excavation for rhizome, to ensure that an adequate volume of material has been removed to account for all of the invasive material.

On site burial should be performed to a depth of at least 5m. The material should then be covered with a geotextile layer (e.g. Lowtrak) or a heavy gauge polythene sheet prior to infilling.