by Charmian Robinson
in Industry News
on 23 Aug 2013 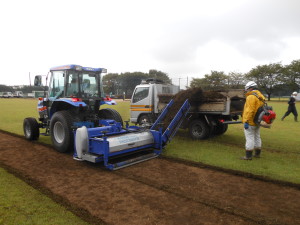 Campey Turf Care Systems has supplied machines to assist in the decontamination of grass and soil in and around 53 Japanese cities affected by the devastated Fukushima Daiichi Nuclear Power Station.

The Koro Field Top Maker (FTM) from global machinery distributor Campeys based in Macclesfield, Cheshire, and has been approved by the Japanese Ministry of the Environment as the preferred product to remove contaminated turf from radioactive areas near the nuclear plant.

In March 2011, the Tohoku earthquake, and subsequent tsunami, devastated towns and cities along the coast of North East Japan - causing critical damage to the Fukushima Daiichi Nuclear Plant.

More than 19,000 people died and 115 cities in eight Japanese prefectures were affected. The result is radioactive contamination across a huge swathe of the country.

In the months following the disaster, the Japanese Government took measures to decontaminate the worst affected areas.

The Ministry of the Environment experimented with many different ways to reduce the radioactivity held in the grass and soil of public spaces and sports fields, including methods for removing the surface layers.

The Toyo-Green Group is one of the foremost companies in Japan specializing in turf grass science, engineering and management, and is the Japanese distributor for Campey Turf Care products.

Since the nuclear disaster the Toyo Maintenance department has been applying its expertise in this field by implementing effective methods of nuclear de-contamination in soil and turf.

David Harrison, Export Sales Manager for Campey Turf Care Systems was consulted by Toyo Maintenance for advice on available equipment to assist them their de-contamination campaign.

David recommended the Koro FTM - a heavy-duty fraise mower - used all over the world to renovate professional sports pitches and other sports turf facilities. 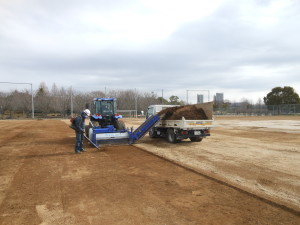 "The Koro FTM removes unwanted surface matter such as poa annua, thatch, weeds or the entire surface to a depth of 50mm, and seemed the ideal machine to tackle this problem" explained David.

"They concluded that if it were possible to accurately remove the top surface layer of contaminated turf, where radioactivity had been absorbed into the layer of thatch, you could effectively reduce contamination to a safe level in many areas, with the advantage of not having to re-instate new turf"

Toyo-maintenance conducted tests over a wide variety of turf and soil surfaces and the results proved extremely encouraging, with significant drops in levels of contamination in all treated sections.

Trials have also been done to similar effect in rice fields, grasslands and forestry-controlled spaces.

The Koro FTM has been given the official go-ahead and is now the only machine of its type approved for working on the nuclear clean-up project in Japan. Several machines are now working in the affected zones, cleaning up parks, sports fields and residential areas.

Decontamination in this form will be completed by March 2014 but the 53 cities closest to Fukushima will take several more years of intensive clearance and re-construction before their open spaces are safe to be used again.