by External source
in Conservation & Ecology
on 11 Aug 2014 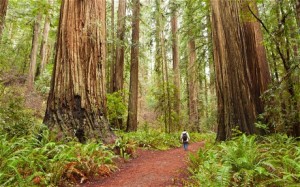 Trees from America, Japan and southern Europe will be planted in Britain's forests to avoid them shrinking by 40 per cent by 2080 because of climate change.

Japanese red cedar, giant redwoods and trees from the continent will replace oaks and pines in Britain's forests as woodlands must adapt to climate change to survive, a study suggests.

Species of trees grown in the UK in the Victorian era are also set to return as foresters work to ensure Britain's woods can survive rising temperatures, frequent droughts and diseases.

Experts have warned if nothing is done to change the composition of Britain's woodlands by 2080, forest production could decrease by more than 40 per cent as current trees struggle to survive.

Scientists at the University of Twente, in the Netherlands, and at Forest Research, the research agency of the Forestry Commission, estimate forests could be reduced by 42 per cent by the 2080s because of climate change.

They studied spruce, pine and oak - which make up 59 per cent of British forests - and found that new species would be needed to maintain woodlands in the future.
Luc Boerboom, assistant professor at the University of Twente, said: "In the Netherlands we have much less forest production than Great Britain. However, we too can expect change: our grandchildren will walk and bike into a different kind of forest than we do now."

Foresters are being advised to plant more trees that are capable of flourishing in warmer temperatures such as Japanese red cedar and giant redwood trees from America, instead of traditional oaks and spruces.

Have something to say about this article? Start a conversation today on our message board.