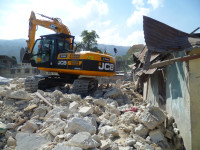 A small fleet of powerful JCB machines is playing a big role in paving the way for rebuilding in part of earthquake-devastated Haiti.

Two JCB excavators and a JCB wheeled loading shovel have been bought by the international charity Oxfam and donated to the not-for-profit organisation Disaster Waste Recovery (DWR) which is clearing damaged houses and recycling the resulting debris in one of the poorest areas of the Caribbean island's capital Port Au Prince.

The JCB JS220XD and JS145W excavators and JCB 426ZX wheeled loading shovel machines are working in partnership demolishing damaged properties and loading a crusher and screening plant. The resulting debris is then recycled and used in the reconstruction of buildings, roads and pavements.

Oxfam's Logistic Co-ordinator in Haiti Hubert Ballaman said: "The location where the JCB machines are working is in the town and often in-between houses and the decision on which houses are demolished is often down to local residents who request their plot to be cleared. 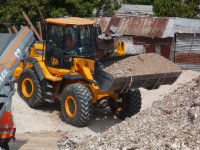 "The team is working in very difficult conditions; it's busy, hot and dusty and controlling lots of curious passers-by can be an issue for the operators and residents.

"All the operators are very pleased with the JCB machines and they particularly appreciate their ease and precision of operation and working in an air-conditioned cab with a comfortable seat."

The demolition and clear-up operation follows the earthquake on January 12, 2010 which measured 7.0 on the Richter Scale and killed around 230,000 people. More than a year on, 800,000 people are still living in camps. 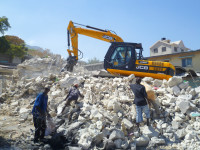 Immediately after the earthquake, JCB Chairman Sir Anthony Bamford donated two JCB 3CX backhoe loaders worth $150,000 to help with the relief effort. They are currently working for not-profit organisation Food for the Poor and have so far been deployed to clear rubble, excavate sewage pits, dig out foundations and reconstruct walls and build schools and sanitation facilities.

The UN Development Programme estimates that 200,000 buildings collapsed in Port au Prince, creating 10 million m³ of rubble - only 20 % of which has so far been cleared.

DWR's project is financed by Oxfam GB with funding from the UK‐based Disasters Emergency Committee and is working in neighbourhoods of Port‐au‐Prince, demolishing damaged buildings and clearing away debris, so that people can return to their homes. DWR is a specialised UK‐registered not‐for‐profit organisation that focuses on designing and implementing waste and debris management projects in post‐disaster and post‐conflict situations.
www.JCB.com