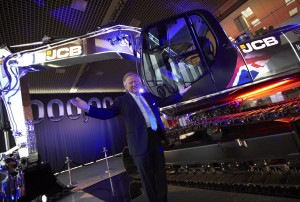 Hundreds of JCB employees today joined in the celebrations to mark the production of the company's one millionth machine - enough diggers to stretch from the UK to Australia.

The landmark is being marked in vivid style with the whole of the glass frontage of the World HQ at Rocester, Staffordshire, UK, being encased in a graphic wrap marking the achievement. The picture covers an area of more than 900m² and a total of 207 windows have each been individually covered with a section of the print - evolving like a giant jigsaw puzzle over a total of 50 hours as five people pieced it together.
Nestled behind the glass in the reception area is the actual one millionth machine, a 22 tonne JS220 tracked excavator in shimmering silver. Staggeringly, if all of the one million machines made by JCB were laid out end-to-end they would stretch from the UK to Australia.

JCB Chairman Sir Anthony Bamford said: "It's taken JCB more than 67 years to produce its millionth machine. Incredibly, one third of those machines has been produced in the last six years. Reaching the million milestone is the result of a huge effort by the JCB team past and present and it's an achievement everyone can be justifiably proud of. Given our continuing growth, JCB's two millionth machine will be produced in considerably less time."

More than 2,500 JCB dealers and customers will be joining in the celebrations in the next five weeks as the company embarks on the next phase of its global growth programme by staging the biggest ever product conference in its 67-year history. The event in Staffordshire is showcasing all the latest machines in JCB's construction, agricultural and industrial ranges.

JCB CEO Alan Blake added: "The global dealer and customer conference is the biggest in JCB's history and unveiling our latest product innovations to delegates, will be a key driver for our future growth. Given the scale of the event, JCB's investment in this conference is also providing a very positive spin off for the local and regional economy."

During the conference JCB will demonstrate more than 100 of its innovative machines as well as present technical details on their features and benefits. Over the period of the conference JCB has booked a total of 4,700 hotel room nights for delegates from almost 130 countries.