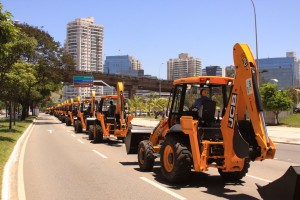 JCB has won a massive order for more than 1,000 of its iconic backhoe loaders in a deal which is designed to transform the rural economy of Brazil.

Brazil's Ministry of Agrarian Development has signed a tender for the JCB backhoes worth more than £40 million. The landmark order for the 3C machines comes as the company marks 60 years of backhoe loader production.

The 1,000 machines will be delivered throughout 2013 and put straight to work improving rural roads to ensure food produced for sale gets to market much quicker.

While the machines will be manufactured at JCB's new $100 million factory opened last September by Prime Minister David Cameron in Sao Paulo, the deal will also bring huge benefits to JCB's UK factories. Transmissions and axles will be supplied by JCB Transmissions in Wrexham and 12,000 hydraulic cylinders by JCB's World HQ at Rocester.

The latest order comes after JCB Brazil successfully supplied more than 1,000 backhoes last year to the same customer as part of the first phase of the development of rural roads.

JCB CEO Alan Blake said: "This is a very important deal for JCB and we are delighted to have secured the tender for a second year running. It is huge testament to the quality and versatility of JCB's backhoe loaders and it's fantastic to win an order of this size as we celebrate 60 years of backhoe loader production this year."

JCB Brazil Managing Director Carlos Hernandez said: "It is a great honour to have been chosen again to supply another 1,000 backhoes that will be used to improve the infrastructure and services of the smaller municipalities. We are really pleased we can contribute to the economic development of Brazil, particularly to support the agricultural sector."

A third of all farms in Brazil are family enterprises in remote areas of the country where the road network needs to be upgraded. The purchase of the machines is to facilitate that development and help meet federal government growth plans. In Brazil there are more than 400,000 family farms and the machines will be used in more than 1,000 municipalities in small cities with less than 50,000 inhabitants.

As part of the deal JCB will also provide training for machine operators as well as maintenance and technical support.

Despite the maturity of the versatile backhoe loader, it is still one of the biggest selling pieces of construction machinery and is remains the world's 4th most popular machine in the construction equipment sales league table. JCB is the world's number one backhoe producer thanks to the continued innovation on the machine. Recent innovations include the introduction of the patented TorqueLock system, which eliminates torque convertor slippage on JCB backhoes and significantly increases the on-road efficiency of the digger by reducing fuel consumption and exhaust emissions by up to 25%.

JCB backhoes are manufactured in the UK, India and Brazil and the company sells the product in 120 different countries. The business unit which manufactures the machines has won seven Queen's Awards for Enterprise.