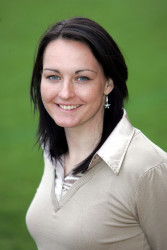 Great Britain, England and Leicester hockey star Jennie Bimson has joined TigerTurf as a specialist hockey consultant, working with its R&D and the commercial team to develop the next generation of hockey surfaces.

Prior to her appointment, Jennie had already worked with TigerTurf on the development of the WETT (Water Efficient Tiger Turf) series - the UK's first true monofilament hockey pitch, the advantage of which is that the strengthened surface performs like a watered field but without the extensive amount of water usually required. This provides a benefit for both the user and the environment.

TigerTurf's WETT surface which has been recently installed at England's premier hockey club Cannock, is tested to FIH standards, which it achieves wet or dry. The exclusive monofilament fibre is tightly curled and performs to the same high standard as the nylon product favoured by top UK club players. The result is a true consistent surface allowing players to perform close ball skills and unleash controlled passes in terms of speed and direction for an unrivalled match performance. Offered with a 10 year surface guarantee, the extra strength and curl in the fibre ensures maximum surface recovery, time and time again.

Next in the TigerTurf WETT series is a Sand Dressed option specifically designed as a funding-friendly surface for schools and community projects. Utilising the same extra strength fibre and design, school and county hockey teams can now benefit from the same superior performance as the highest clubs. The surface has already been installed by Imperial College, London, and Bradfield College, Berkshire. 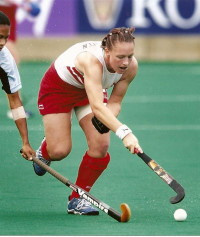 Jennie said: "I am very excited to be working with TigerTurf, the UK's largest sports surfacing manufacturer, building upon the success of the WETT series to further develop surfaces aimed specifically at the needs of hockey."

TigerTurf is recognised across the world as a solution based manufacturer of synthetic turf.