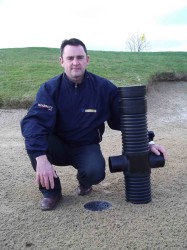 In 2008, he teamed up with the company, one of the UK's largest golf course constructors, to launch the device which provides the solution to flooding of golf course bunkers. His appointment provides golf courses with a direct link to expert advice and technical assistance.

During his first few months in the job visiting hundreds of golf courses, Jeremy has noticed just how many are trying to solve the problem of flooded bunkers with all sorts of ingenious but 'Heath Robinson' ideas, and is delighted to be able to solve the problems with Bunker Plug, a specifically-designed 'off the shelf' unit, which is quick and easy to fit with practically no disruption to play and with numerous advantages.

With many courses struggling to maintain staffing levels and materials costs getting every greater, the cost effectiveness of Bunker Plug once installed is something course managers should take a look at. Bunker Plug is manufactured and marketed Worldwide exclusively by MJ Abbott, which has more than 40 years experience within the land drainage and golf course construction industries. In 2010, its popularity grew in the UK and plans are in place to launch it in Europe and America this year. 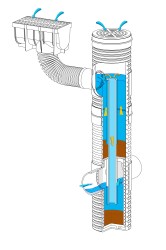 Jeremy invented the unit after experiencing repeated flooding on his courses in East Sussex, an issue affecting many courses at this time of year. The ongoing maintenance of bunkers can absorb a significant amount of the course manager's budget and takes up a great deal of time. Bunker Plug can be fitted quickly and easily with minimal disruption to play, eliminating the need for pumping and improving playability. With correct maintenance, Bunker Plug copes with even the most persistent and heavy rainfall.

Being launched at the show this year, is a new attachment allowing Bunker Plug to be connected to Channel Drainage which is often used on cart paths, but unless cleaned out regularly, it is prone to silting up and blockage. With a Bunker Plug connected, the unavoidable silt infiltration is captured within the unit and can be cleaned out in a moment, saving the annoying task of having to unblock or replace the connecting drainage pipe. The new attachment also gives Bunker Plug much greater versatility when being used in other areas on a course other than in a bunker, allowing for several drainage runs to be collected into one unit.

In his ten years or more of greenkeeping, Jeremy found working in the rain a necessary but often unpleasant task, but is now at his happiest when it is raining, highlighting the benefits of Bunker Plug and often spares a thought for his ex colleagues and greenkeepers and the hard work they all do, often in difficult circumstances for little reward.

Some of the benefits of using Bunker Plug are:

- Eliminates flooding in 90% of cases.
- Can be fitted by course staff in approximately one hour.
- Significantly reduces contamination therefore reducing refurbishment intervals and costs.
- Increases course playability, which in turn increases revenue.
- Provides a flushing point for bunker drainage and allows for outfall verification.
- Allows bunkers to be pushed up and raked within hours of heavy rain.
- Eliminates surface pumping onto fairways/rough removing the possibility of mower damage from pumped debris.
- Can be retro fitted - surface or subsurface fitted - interchangeable in two minutes.
- Not just for bunkers! Any problem area on the course can benefit from Bunker Plug!