by Football Foundation
in Synthetics and Football
on 06 Jul 2018

Jesse Norman, MP for Hereford and South Herefordshire, officially unveiled a new third generation (3G) artificial grass pitch (AGP) at The Hereford Academy recently (Friday 29 June 2018). He was joined on the day by Jonathan Walker, Chief Executive of the Herefordshire FA, who was similarly pleased to see the facility officially opened. 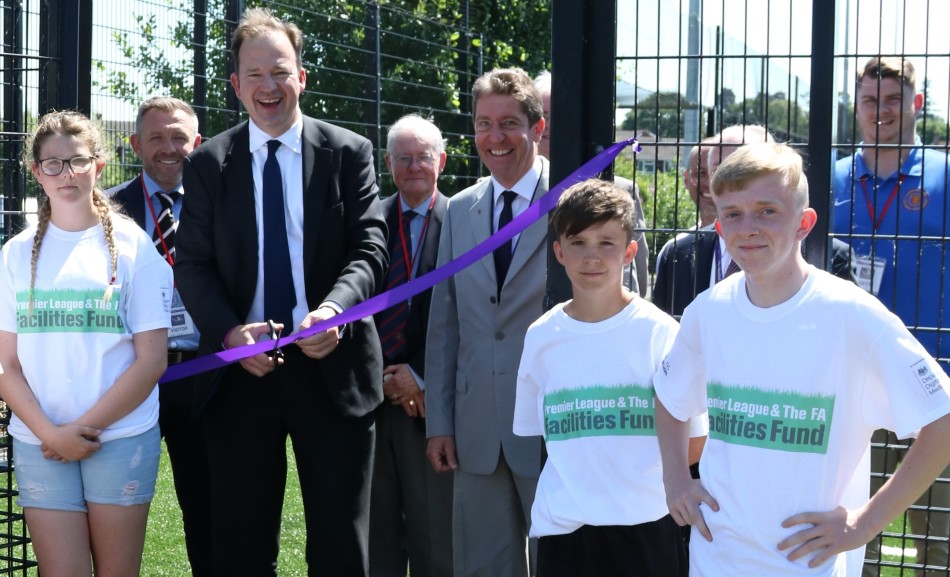 The upgraded facility was made possible thanks to investment from the Premier League & The FA Facilities Fund, which is delivered by the Football Foundation. The grant enabled the Academy, working in partnership with The Bishop Anthony Educational Trust, to resurface their existing 3G AGP to offer users a state-of-the-art playing surface.

This means the school's students and the local community can continue to safely enjoy a range of sports on-site, even during the winter months, at the only all-weather facility of its kind in the county. The refurbished playing surface will join the Academy's existing full-size grass pitches and training area, as well as a two team changing pavilion at their Marlbrook Road site. This will provide a first class sports hub, which can be used throughout the year.

As well as The Hereford Academy students, local grassroots clubs Pegasus FC, Hinton FC and Belmont FC will use the facility on a weekly basis. Each club will now be able to cater for higher demand from the local community, thanks to the surface being still being available in bad weather conditions, which would render many grass pitches unplayable.

Hereford FC will be delivering sessions through their Academy and Community arms. In addition, the Herefordshire FA will continue to use the site as its principal venue, regularly delivering a number of coaching courses at the facility.

The Hereford Academy were awarded a £150,548 grant from the Premier League & The FA Facilities Fund towards the project. The school worked alongside the Football Foundation and the Herefordshire FA to compile a five-year Football Development Plan, which is a vision of how sport will be played on site with an emphasis on increasing participation.

It is expected that the site will see an increase of over 600 regular users at the Academy's facility over the five years, supported by plans for the school's partner clubs to introduce a total of 18 new sides. This will result in the cumulative number of teams increasing from 39 to 67, with a 72% boost in participation for Under-14 footballers predicted as a result.

Local female football participation is expected to grow by 55% thanks to the creation of 12 new grassroots teams at the site. This will also be aided by the formation of a new female football league, for which the site will be a primary venue. Herefordshire FA will also support participation in the adult age brackets, through the introduction of walking football sessions.