0 Jessica Evans is the Chartered Institute of Horticulture Young Horticulturist of the Year 2015!

Jessica Evans, Head Gardener at Tintinhull Gardens, National Trust won the much sought after and nationally acclaimed Chartered Institute of Horticulture's 2015 Young Horticulturist of the Year competition (YHoY), at the Grand Final held at the National Trust's Barrington Court property in Somerset on 9 May. 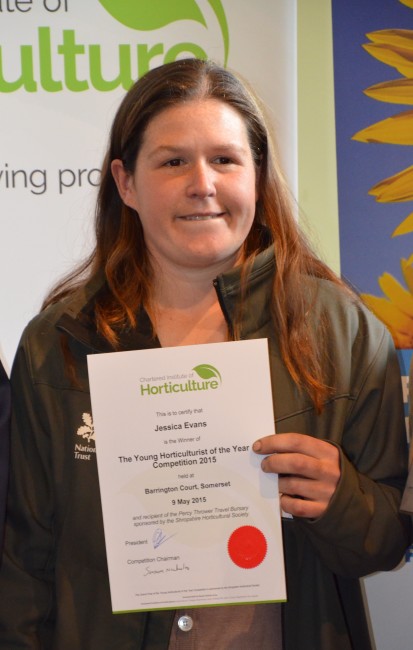 Jessica, representing the South West Branch of the Institute (CIH), won the coveted £2,500 Percy Thrower Travel Bursary, provided by the Shropshire Horticultural Society. The Bursary enables the competition winner to undertake a trip, anywhere in the world, to study a subject related to their chosen field of horticulture.

After the competition, Jessica said "I am delighted to have won the Young Horticulturist of the Year 2015 competition and look forward to using the travel bursary to further my training in horticulture. Having finished second in the competition last year, my over-whelming emotion when the final scores were announced was relief, especially as this was the last year I would be eligible to enter. I would now really like to support the running of the competition, and to encourage others to take part, as it is vitally important to celebrate the quality and knowledge of young horticulturists. I'm not sure yet where the travel bursary will take me, but I will be looking to find best examples of horticultural standards to give myself something to work towards."

The contestants from the Institute's eight branches battled it out in a closely fought competition in front of an audience of 60 supporters from across the industry, including the national competition sponsors; James and Julie Hodgson representing the Shropshire Horticultural Society, Peter Hunt from MorePeople and Ruth Ashfield from the Horticultural Development Company (HDC). There were cash prizes for all contestants, plus a year's free membership of the Chartered Institute of Horticulture and Plant Heritage. Overall, the prize money for the eight finalists was £5,000, as well as other prizes throughout the competition, totalling in excess of £13,000, for those who took part in the heats and regional finals.

This prestigious competition is now in its 26th year and over 1,800 young horticulturists from across the UK and Ireland have taken part this year in local heats and regional finals over recent months. For the eight finalists it was a hard slog to reach the Grand Final, having answered 40 questions in the heats, as well as upwards of 40 questions across every aspect of horticulture in their regional finals. They also had to cope with tough plant and pest and disease identification rounds to secure their places in the Grand Final.

Rosie Yeomans, Broadcaster, Lecturer, Writer, Garden Consultant, and Question Master for the Grand Final said, after the competition, "What a friendly and impressive group of young horticulturists gathered at Barrington Court for the 2015 Grand Final of the YHoY, their calm professionalism stood out. Well done to winner Jessica and all the finalists, it was an exciting and closely fought battle. After the competition we toured the gardens, notebooks and cameras out again; it's great to know that the future of our profession is in such good hands." 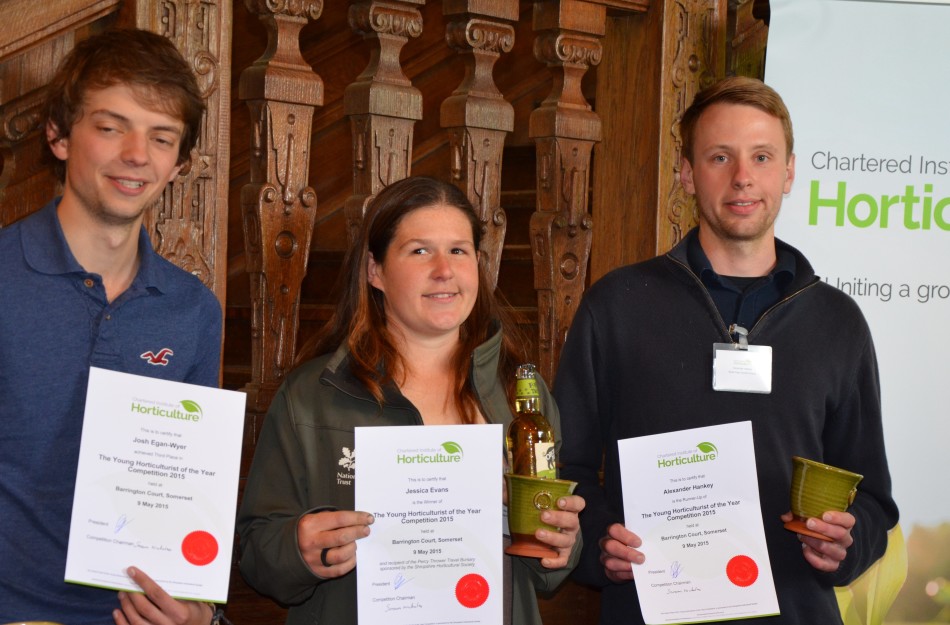 Andrew Gill C Hort FCIHort, President, Chartered Institute of Horticulture said "The Grand Final fulfilled its promise to be as exciting as ever with the contestants battling it out right up the final round. Rosie Yeomans did a superb job as Question Master, really bringing the best out of the eight contestants, who are all winners in my book! The day went like clockwork, the sun shone and everyone enjoyed it hugely, as did I. Jessica Evans was the clear winner on the day and I feel that her calm maturity, combined with her passion for plants, will ensure she excels as an ambassador for the Chartered Institute of Horticulture. The Young Horticulturist of the Year competition is more important than ever to the Institute and horticulture in general, as we encourage and develop the horticultural professionals of tomorrow, tapping into the current popularity of growing plants; there is no more satisfying job."

James Hodgson, a trustee of the Shropshire Horticultural Society said "On behalf of the Shropshire Horticultural Society I would like to offer Jessica my congratulations for winning the title of Young Horticulturist of the Year. It was a closely fought contest with Jessica coming through strongly in the final round. The Society is once again delighted to be associated with the competition and the £2,500 travel bursary which we hope will be of great benefit to Jessica and her future career in horticulture."

Ian Wright, National Trust Garden Adviser said "We are very proud of what Jessica has achieved and are delighted that we can play our part in supporting the next generation of horticulturists. It is important we continue to encourage and inspire young people into horticulture and cultivate a new crop of Head Gardeners for the future. The finalists all demonstrated a great depth of knowledge of all things horticulture and I am sure will now be role models for young people new to the industry."

The 2015 finalists, from the eight Chartered Institute of Horticulture branches were:

Anyone interested in taking part in, or sponsoring, the 2016 competition should contact the Chartered Institute of Horticulture, email: cih@horticulture.org.uk

The Chartered Institute of Horticulture is grateful to our national sponsors of the 2015 competition:

The other National sponsors for the 2015 competition are the recruitment company MorePeople, the R&D levy body the Horticultural Development Company (HDC) and Wyevale Garden Centres. There are also many regional and local sponsors.