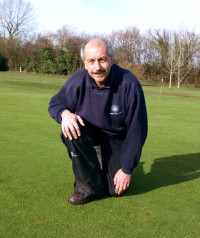 Evaluated by Chris on four greens in September 2009, Jewel proved more than equal to the task of eradicating moss and an infestation of pearlwort. As Chris points out, the product did everything it says on the label and he is now planning to use Jewel on the remaining greens across the course in the spring when weather and ground conditions are suitable.

First introduced to Jewel by fellow course manager Paul Worster of Minchinhampton Golf Club, Chris explained that he had been looking for an effective way to deal with moss ever since the withdrawal of Dichlorophen in 2007.

"Chippenham's golf course is built entirely on clay and the recent wet summers have seen moss encroach onto all of the greens," he said. "Mechanical removal was simply too aggressive and was not that successful either. I needed an alternative, ideally one that could eradicate moss and also perennial weeds as we had been experiencing increasing weed infestations, in particular, pearlwort."

Jewel is a soluble granule which can be used all year round, but Scotts recommends two applications per year - at a rate of 1.5kg in 500 litres of water per hectare - in early spring and autumn, as the best result is achieved when weeds are treated at an early stage and at times when moss is abundant.

"Within 14 days of applying Jewel, the moss was going black and the pearlwort was yellowing," recalled Chris. "We followed up with a light scarifying to remove the dead material and within three to four weeks the treated greens were back looking and playing at their best. I'm very pleased with the results and look forward to using Jewel on the remaining greens in the spring."