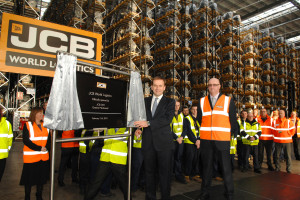 JCB World Logistics took over the former 383,000 ft² Blue Planet warehouse in Newcastle-under-Lyme in July 2013 and since then almost 80 new warehouse and office staff and 20 drivers have been recruited.

In the next two years employment levels are expected to triple to more than 300 as the facility becomes fully operational.

JCB World Logistics, which is run by global logistics partner DHL, is the central receiving hub for supplier-bought components used in the manufacture and assembly of JCB machines.

The company's move to the premises saw the consolidation of seven warehouses into one and as a result will see road mileage reduced by 20% per year. The new facility holds almost 25,000 pallets of components.

Among those employed at the new facility is former British Army tank driver Bill Martin, aged 55, of Talke Pits, Newcastle. He started work at JCB World Logistics in November through an employment agency and is now one of 18 agency workers who are being transitioned to permanent DHL employees next month.

Bill, who has spent 34 years in warehouse work and is also a qualified IT teacher, said: "This is a fantastic place to work and I can honestly say that I come here every day with a smile on my face because I love what I do so much."

JCB's investment at JCB World Logistics facility not only demonstrates long term commitment to UK manufacturing but it brings much needed long term employment to the local area."

Based on land next to the A500, JCB World Logistics is one of the UK's most environmentally-friendly buildings with rainwater harvesting facilities, optimised use of natural light and the deployment of sustainable and recyclable materials in the construction and fitting out of the building.

The use of natural light has been so effective that JCB World Logistics has operated for two months without electric lights being switched on during the daytime.

In addition, the building is so well insulated that the biomass boiler installed at the site has also not had to be switched on yet this winter.

JCB has agreed a long-term lease for the building and has been conditionally offered £2.9 million from the Government's Regional Growth Fund to support job creation on the site and to provide training programmes.

Newcastle Borough Council supported JCB's move to the site and JCB has also signed an option to purchase an adjacent 7.7 acres of land from the local authority to facilitate future expansion.