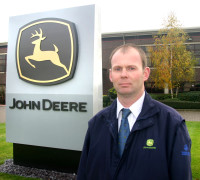 John Deere Limited is pleased to announce the appointment of Richard Charleton as Product Manager for the Commercial and Golf & Turf equipment range.

The continued growth of the Commercial and Consumer Equipment (C&CE) Division within the UK and Ireland has presented the opportunity for John Deere Limited to invest in this new position.

Richard joined John Deere Limited in January 1991 as C&CE Demonstrator and Instructor. Successfully progressing through the company to become Area Service Manager for the UK and Ireland, Richard then became Territory Manager for Scotland and the north of England in July 1996. Richard's wealth of experience will stand him in good stead to take on this challenging role.

Richard's new role will be to effectively manage the sales and marketing elements of the professional and golf & turf product portfolio.

The appointment of Richard sees Henry Bredin fill the position of Territory Manager for North England and Scotland.

Henry renews his relationship with John Deere Limited as he had previously been with the company when he joined in the summer of 2001 as a management trainee with the C&CE division.

Henry is a graduate of Harper Adams University College with B Eng (Hons) degree in agricultural engineering, he had previously completed one year of his degree course on a work experience placement in the John Deere Limited customer support division.