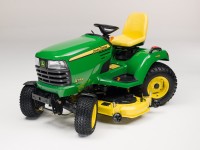 John Deere's five millionth lawn tractor, from the X700 Ultimate range, recently rolled off the assembly line at the Horicon, Wisconsin factory in the United States.

Production of the company's first lawn and garden tractor began at Horicon in 1963, when John Deere built 1000 units of the 110 model. An original 110 can be seen at the Smithsonian Institution's National Museum of American History in Washington, DC; a fully restored, working example of this pioneering lawn tractor is also on display in the foyer of John Deere's UK headquarters at Langar in Nottinghamshire.

"Reaching five million lawn tractors is a major milestone for us," said Horicon factory manager Dan Hoffman. "Over the last 47 years we have established a reputation for making durable and reliable products that are now used throughout the world."

John Deere's turf equipment product marketing manager Henry Bredin added: "Since we started selling lawn tractors in the UK and Ireland in 1986, a range of popular machines from the 455 to the current X Series models have all come out of this factory, and have been the backbone of our commercial mowing business."